Today’s post was the first in a month long series celebrating and investigating women creating horror, past and present as part of the international Women in Horror Month celebration. You can see all of the great events that happened during the month by checking out womeninhorrormonth.com

Emily Hagins is kind of an incredible person, and I’m proud to say that I’ve had the privilege to work with her. We worked together on the Chiller Channel’s original anthology movie “5 Senses of Fear.”

She started working as a production assistant before most of us realized films were made rather than just magically materialized and she’s been creating quirky fun horror films ever since. If you’re looking for one of the horror industries most kick-ass female directors, you found her. And she’s been making her mark on the industry since she was 12.

What first inspired you to want to write and direct film?

I had a very active imagination growing up, so I was always writing stories. I’ve also loved movies for as long as I can remember, but I had never thought about putting the two together until my dad asked if I wanted to make a “commercial” with our family camcorder. He used to work for a small advertising firm, so he thought it would be a fun creative exercise for us to do together. He walked me through writing a script, storyboarding, making a shotlist, shooting, and editing. He never did anything for me, just guided me along. And I instantly fell in love with the movie-making process. So I started to make my own shorts, and PA on local productions in my hometown of Austin, TX. I wanted to learn as much as possible from that point on!

You wrote and directed your first film, Pathogen, in 2005 at the age of 12, correct? Can you tell me a little bit about the process of making the film?

I was a PA on an indie film when I was about 10 or 11,  and my impression of making a feature was “Man, it’s a like making a short film but every day! That’s gotta be the dream!” But of course it was a completely different beast. I wrote the script, brought on friends, learned that a bunch of 12-year-olds didn’t want to work all day for several days, hired actors, figured out equipment, and accepted help from anyone who was kind enough to donate their time and/or resources. I had no money. It took a couple of years, but it was a life-changing experience for me — I knew this was my passion in my heart. I wasn’t really aware of what I could and couldn’t do as a 12-year-old, and I worked as long as it took to complete it.

What was it like beginning your career in a leadership role so young? Did you encounter any difficulties during the process?

Yes, definitely. I still have problems with people taking me seriously as a writer/director. But that doesn’t bother me very much anymore because I hope to only work with people who value and respect the entire cast/crew. If someone is judgmental and/or disrespectful because of my age (or gender, for that matter), I feel like they may have other issues with being a team player. And to me, those people just aren’t worth working with in the long run.

What about creating for the horror genre do you enjoy most?

I love creating the atmosphere, the set up, and the uneasiness. The puzzle is always “How does this become scary? What is unsettling about this situation?” and finding the best way to put the pieces together. I don’t like unnecessary jump scares, or found footage in most cases. They don’t feel like techniques to me. They feel like cheap solutions to a problem that isn’t a problem. I feel like some people have forgotten that horror movies don’t have to look and feel cheap. There’s so much you can do to tell engaging stories with genuine characters, and scare people along the way.

Do you feel that being a female director influences the types of projects you make?

For sure. It’s what I know best! I’m 22, and I like incorporating girl geeks into my writing because it really comes from the heart. Even if I’m writing male characters, or characters that come from different backgrounds, I try to keep the basics close to things I have experienced. I think you can write the coolest story in the world, but it won’t feel real if you don’t find the truth of the story in yourself. I know that sounds like a fortune cookie, but it’s something I really believe in! And there are lessons in directing that I have always incorporated into my writing, such as: being yourself, being creative, dealing with consequences, and perseverance. I like writing young characters who have to work hard to accomplish something because that’s something I’ve learned a lot from.

I recently re-watched “My Sucky Teen Romance,” and I was struck by the honesty of the performances in the film. What was your process when working with the actors to help bring out the strength of their performances as those characters?

It was really important to me to keep the kids feeling like kids — they’re awkward, they’re geeky, and they don’t know what they’re doing. They’re not always thinking about the consequences. I know there are some goofy lines, and things that keep it in a heightened reality, but I wanted the actors to feel like they could disregard the script if something didn’t feel true to the way they would act or talk in a given situation. I’d rather have those awkward pauses, and not gloss over the moments that make the teenage romances and friendships realistic. I didn’t want to look at my teenage years the way I wish they were, 90210-style. I just wanted to stick to what I what I actually knew and felt.

What was you favorite project to work on so far? What about it made it so enjoyable? 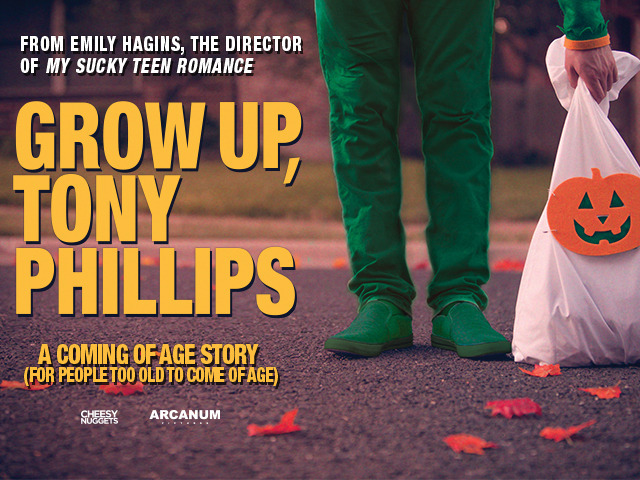 Oh man. I feel like I learn so much on every film! My Sucky Teen Romance was silly, fun, and very rewarding. I felt like I learned a lot about my sensibilities on that one. I had a blast on Five Senses of Fear, and working with a new cast/crew in a new place! That was very inspiring. Grow Up, Tony Phillips, my most recent feature, had a cast and crew that really bonded and helped each other make that movie be the best it could be. I just can’t wait to take everything I’ve learned and make something new!

What have you been up to lately? Are there any new projects coming down the turnpike for you?

I moved to LA last June, so I’ve been meeting a lot of people and taking in a lot of information. It’s been a very fun and interesting experience so far! I’m working on a few horror scripts, so hopefully one of those will pan out in the near future.

Why did you name your company Cheesy Nuggets? Just curious.

I wish I had a good answer! It was just a goofy thing I came up with in middle school. And it stuck!

Is there anything you would like the readers of Horror Made to check out? Such as a website, or a movie, etc.

I’m working on a new website. But My Sucky Teen Romance is on Netflix/DVD/Blu-Ray/VOD.

Grow Up, Tony Phillips is on DVD/VOD.

[That can be found HERE]