A Penny Down the Well 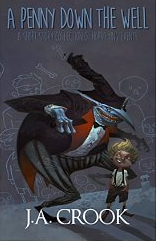 A Penny Down the Well is a collection of 5 horrifying short stories “focused on turning events that we experience in our everyday lives into something dramatically more twisted and profound.” (Crook Loc 46).

Since this anthology has a manageable number of segments I will be bringing you the synopsis for each story followed by my thoughts and then I will bring you my impression of the collection as a whole at the end.

Jared is a new renter moving into a slum-like apartment complex  in New York City. Soon after his arrival he ends up having to confront the apartment’s disturbing past and the mystery that terrorized it’s previous tenant.

Down the Drain plays with a fairly common fear, the fear of moving into a new home. You’re never really sure what events may have transpired in the space before you arrived or what evidence may still be lingering within it. This particular story really hit home for me because of how much I moved around as a kid. My dad was in the Navy, so every time he was stationed somewhere new my family uprooted themselves and found a new home in a new part of the world. Part of moving somewhere new is exciting and adventurous, but wrapped in with that sense of adventure is the caution and fear of what your new home might hold. For me, I was always afraid that someone- or something- would still be living in the space when we moved in. So I would always take it upon myself to investigate every nook and cranny before deciding it was safe enough to begin unpacking. This piece really messes with that common experience of feeling uncomfortable when moving. The secrets hiding around you will never be noticed until darkness falls and you have the space to yourself for the first night.

This story has you following the journey of the young and carefree, Clint, who has just purchased himself a beautiful new car, a classic car, a car at a suspiciously low price- a hearse. Luckily this hearse helps him  gain a job at a local funeral home. Unluckily, chauffeuring around the recently deceased has it’s own unexpected challenges.

Their Last Ride explores our discomfort with being in close proximity with the dead. And it doesn’t just explore this discomfort, it exploits it. Out of all the stories in this collection it felt the most like a classic Twilight Zone tale, but it manages to remain unique because of how the story is told. This piece plays with your sense of reality and makes you question Clint’s sanity before getting further into the bizarre meat of the situation.

A Penny Down The Well

This segment looks into the life of a child being mercilessly bullied by his schoolmates and what happens when his wish for freedom is executed in ways he never would have imagined.

There is a reason why this story became the name-sake for the entire collection, and that is because it is such a memorable and horrifying tale. Even though it isn’t a long story it contains a fully-fleshed out arc and characters. I fell in love with the cast of characters, the antagonists and the protagonists alike. This story somehow manages to play out in your mind like you’re watching a movie. There’s action, exploration of a world other than our own, and a collection of moments that will shock and horrify you. This particular piece feels like a mixture of Stephen King’s It with the fantastical realism often found in the work of Neil Gaimen with just a dash of classic slasher horror added in.

The Quinn family takes shelter from an oncoming storm with the people of Glencoe Kentucky. What they discover inside their shelter turns out to be anything but safety.

This is another story that plays on a fairly universal fear and twists it in a way that makes you even more uncomfortable. I won’t go too much deeper into my feelings on this one, because I’d be treading dangerously close to spoiler territory. What I will say is that Crook’s spin on acts of god makes this for a very engaging read.

Our Spirits Out West

This story takes you back in time to the days of old where the Greyson party is risking the dangerous journey of the Oregon trail to find new homes and fresh starts in the American west. They’re hopes for a fresh start turn into terror as they are pushed into the darkness birthed by their separation from civilization.

Our Spirits Out West ended up being my second favorite story in the collection. I love that Crook uses the technique of telling the story through the pages of Mrs. Greyson’s journal. This technique makes her character particularly endearing because she is a self educated women in a time when only the rich were allowed access to such niceties. Her spelling mistakes, and the honesty of her telling make this tale one that will pull at your heart strings. And the journey she goes on will pull out those very same heartstrings.

The Collection as  a Whole

What this collection of short stories succeeds in doing that many anthologies seem to fall short on. Which is that each tale contained within is strong enough to stand on it’s own. As a collection they work together to explore the fears we encounter in the day to day mundane.And takes those encounters to the next level of fear. Crook’s voice is strong in this collection and manages to keep it tied together without his voice being lost in the diversity of the tales’ diversity. I’m giving A Penny Down the Well 5 out of 5 blood spattered stars. I really enjoyed this book and have actually read it twice through already. To those of you who enjoy bite sized tales that don’t skimp on substance, I heartily recommend that you give this collection a read.

-And on a personal note, his stories had me so engaged one night that they may have saved my life. Here’s that story: Ghost of Bacon Past–