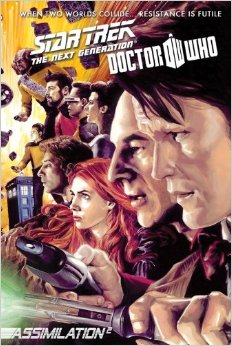 A ways back I began mentioned that I would be reviewing the Assimilation 2 comic. But It’s taken me a while to get around to this one. The main reason being that it doesn’t really fit into the horror genre per-say so I started a whole new blog to talk about my love affair with Sci-Fi and Fantasy. But the more I thought about it, the more I realized that even when my focus blends into those other genres I’m still drawn to the darker and scarier corners of the genres. So, in a long-winded and round-a-bout way, I decided that here on Horror Made is where I will talk about any of the genre things I’m reading. Because “horror” to me isn’t just about dark places, slashers and monsters. To me, horror is that feeling you get when something deeply disturbs you or plays on your pre-supposed feelings of safety.

Also, I’m just too darn in love with Star Trek and Dr Who to even prtend it’s ok to not talk about this comic.

OK, on to the review:

Star Trek: The Next Generation / Doctor Who: Assimilation 2: The Complete Series

Artwork by: J.K. Woodward, Gordon Purcell and the Sharp Brothers

The two greatest science-fiction properties of all time crossover for the first time! Captain Jean-Luc Picard and the crew of the USS Enterprise have joined forces with the Doctor and his companions, Amy and Rory Pond, to combat an unholy alliance between the Federation’s most terrifying enemy and one of the Doctor’s greatest antagonists. But once the Cybermen turn on their Borg allies, the Doctor and Picard find themselves at odds over how to proceed against the threat, with the fate of the universe hanging in the balance!

I’ll start with this, as a fan of both Next Gen and Dr Who, my little nerd heart was fluttering around in drunken circles of delight inside of my chest while I read this comic. The personalities of all the characters were cleverly transcribed into comic book form. I was tittering when the Doctor came up to Data and started asking him probing questions about his construction.

The plot for this series managed to blend the usual formats of both shows into one exciting space exploration experience. You get to explore the world of the Borg and the Cybermen and see how the two technologically based cultures blend together. I loved everything about the story in the comic.

What I had a hard time with though was the style of the artwork. I was done in this beautiful painterly quality, but often the lighting in the image felt off making a lot of the panels feel like a photoshop collage of the two shows with a oil-paint filter tossed on top. Once I got used to the style however, I started to enjoy it. Particularly when the backgrounds became more complex. That’s where this artwork really shown.

However, there was one thing that needed to be pointed out. The artist had a really hard time drawing Amy Pond’s face, because most of the time, she ended up looking like Felicia Day. Now, I love Felicia Day, but she is not the red-head that plays Amy Pond. That would be Karen Gillan.

Here’s a comparison for you:

Apart from those moments of awkwardness in the artwork, I really enjoyed this comic. I loved seeing my favorite characters butting heads and then figuring out how to work together. It made me want to go binge watch both shows, and forget about the outside world for a month or two. (I settled on watching a few episodes of each rather than a binge-a-thon, BTW).

So I’m giving Assimilation 2 a 4 out of 5 star rating. For those of us who love both Next Generation and Dr. Who this is a treat to behold.

On the other hand, if you are not a fan of both shows, you will not enjoy the novelty of this series. Outsiders beware, inside jokes abound in this one.

To get yourself a copy of this I reccomend paying your local comicbook shop a visit, but if you’d reather make your purchase online, you can find it here: http://www.amazon.com/Star-Trek-Generation-Assimilation-Complete/dp/1613777825

If you’re interested in hearing my way of hearing my nerd-rant/explanation of why I think this comic does fit into my definition of horror, here it is: