Before we get into the bulk of it (because this is a long winded review) I just want to remind you guys to take a moment and hit up my giveaway. Because wouldn’t you love to get a sexy ink drawing of Elvira blowing you a kiss?

On to the Review! 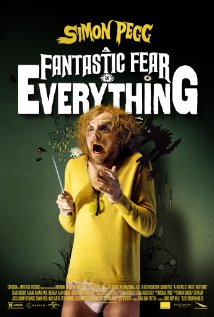 After a week of wakes, miss-communication, and general fails as far as life goes clouding around me I really needed to watch something that would be a good pick-me-up. Something in the realm of horror, but funny. When I found A Fantastic Fear of Everything starring Simon Pegg on Netflix I thought, “Bingo! British horror comedy! That’s exactly what I need right now!” And it was. I thoroughly enjoyed it. The production design and cinematography was brilliant, the slapstick comedy and Simon Pegg’s performance cracked me up, and the stop-motion animation was the perfect blend of disturbing and adorable for my tastes.  However, as I was sitting down to write a review for it I found that most people generally disliked this movie. Rotten Tomatoes gave it a 33% , IMDB a 5.9 out of 10 star rating. I was dumb-founded. I thought this movie was awesome! Why is it that the rest of the world seems to think it was a flop? So I started reading reviews. And yep, I can see some of their points. So this review will be a bit of what other reviewers saw as weaknesses, what I saw as brilliant, and as fair and balanced a review I can offer you.

A Fantastic Fear of Everything

Jack (Simon Pegg) is a writer who is struggling to finish his television script, “A Decade of Death,” about Victorian serial killers – because the research has turned  him into a paranoid wreck. He meets with his agent Clair de Grunwald (Claire Higgins) for lunch and she has some terrifying news for him. A Hollywood producer wants to purchase his script and all Jack has to do is show up in a clean set of clothes. Aaaaahhhhh!!! That means he has to do laundry!

So Jack panics his way through trying to wash his laundry at home with some soap and his oven. Once that blows up in his face he calls his psychiatrist for help while clutching a carving knife in one hand and curled up on the floor in the fetal position.

His psychiatrist calmly talks him through his hysteria and helps him get to the root of his fear of going to the Launderette. Jack calms down and prepares himself for the task, taking a moment to gather his courage by listening to some good old-fashioned gangster rap. He manages to make get into the launderette (aka laundry-mat) and after much hilariously awkward mishaps, including an unfortunate incident with the police:

He finally faces his fears and accepts the irrational nature of them in front of the dreaded launderette. It is there, he ends up finally faced with actual danger. And here, Jack is able to tell a proper story.

The critics really tore this movie apart. And their main complaint was that movie had several different looks to it and the little details tying everything together felt too messy and disjointed. I can understand where they were coming from with this opinion. Because it really did have a variety of visual styles within it’s one story.

A world full of eerie lighting, jump-scares, and a richly designed flat that made you feel like you were trapped in a particularly clever haunted house movie. Hidden within the set were all of the elements of his psychosis. His Victorian serial killer research, a stuffed rabbit, a stuffed hedgehog, a kids book about Timmy, and years worth of clutter (as a visual representation of his emotional baggage). Brilliant, brilliant set design. I mean, even the forest themed wall-paper thematically ties into Jack’s final story at the end aaand into his conversation with Dr. Friedkin which is seen in that transition from his apartment. The transition to the second segment was beautiful. It’s this dream-like sequence where Dr. Friedkin helps Jack explore the roots of his fear of the launderette. It’s in this segment we get to see more tangibly into Jack’s childhood traumas.

Here we see him alone as a child, surrounded by these same visual hints that are starting to build up. The hedgehog, eyeballs (the criminal stare!), rabbits and the spin cycle. It’s so surreal and absurd, how can you not love it? Also it’s freakin’ gorgeously shot with drifting pans and a slow growth of mystical CG enhancements that brings you deeper into that sense of the sub-concious.

In next segment of the movie we get out of Jack’s apartment and in a way, a little bit out of his head. The “inner narration” that was so prevalent in the first segment starts to change  to more of the panicked inner monologue that I feel most of us have. Hmm, do we all do that? I certainly do. The whole, “They’re staring at me! What did I do wrong? Did I forget to put on pants?” kind of thoughts. Just me? Here, the storytelling created through the set-dressing takes a back seat to the characters in the launderette. I will agree with what reviews have said about this segment feeling too drawn out. It’s a long look at his fear of people and dealing with some of the

“manifestations of his psychosis.” lol. Really it’s all just a lead up to an amazing punch-line. Which I will not ruin for you. To say the least, there is a fantastic reveal that happens in the launderette that had me crying from laughing so hard. But yes. It was not as vivid or as frightening as the apartment was. I don’t feel like that took away from it though. I actually felt that it was a visual representation of him dealing with his fears. Because, really, if you’re looking for shadows in a room flooded with florescent lights, how many of them are still going to hold their power over you?

After the incident with the police Jack remembers what his fear of the launderette had been hiding from his conscious mind for so long. Only for a very real threat to appear. (Where, socks and their importance comes full circle.) In this segment Jack’s inner monologue all but disappears. But hey, that happens when you start actually talking to people. And because there is more dialogue, it feels very different from the rest of the film. However, it really gets Jack to the base of his fears. So now that he knows what caused them, he now has to accept them and over come them. It makes sense to me and didn’t really stick out until someone pointed it out. Maybe I was just too enthralled in the story. *shrugs*

The main issue people had with this movie was that it felt like a series of elevator pitches loosely strung together into a film. I really can’t agree with that, because the details are just too cleverly worked throughout the film for the observant viewer to think so. I thought it wasn’t a perfect piece of cinema but it was funny, beautifully crafted and earned 4 out of 5 blood spattered stars. Besides, how can you possibly hate a movie with this animation sequence in it?

Thank you so much for reading this whole massive review! You should reward yourself with a chance for free art or a sweet horror-themed keychain:  a Rafflecopter giveaway