Matt is bringing us a short story that will get your wheels spinning about the horror of losing your mind. Or maybe… It’s about having it taken from you.

Read on to find out what the cookie monster has to say about it:

Sunlight barged its way through the windows and into the thick air of the common room. The light fought against the stifling atmosphere, small bits of brightness making their way to the corners of the room, fighting with the sterile ceiling lights for dominion over the air. The dust motes slowly wafted about like soldiers lost in battle.

A young man in scrubs interrupted the battle. The dust parted in front of him like he was the dust Messiah. The room’s denizens turned their heads to see him – the couple on the couch, the man in the seat next to the television, and Pearl. Sesame Street blared through the tinny speaker, its shrill cacophony announced the end of the battle.

Pearl, like everyone else sitting in the room, was old. She wasn’t quite sure where she was from at the moment, but she knew what she did know. She knew she was a princess – from where didn’t matter, at least that’s what the man in the mirror said – and she knew that sometimes, she would forget what happened. That’s okay, though, as the man in the blue clothes sometimes helps with that. He was a good servant, bringing food and magical pills at odd times during the day and night. The man in the seat waved at him. “Hello, Joe, whaddya know?”

The man in blue sighed and rolled his eyes. “Still not named Joe, Herbert.” It didn’t seem to register in Herbert’s mind. He muttered something about the man in blue being a rude little bastard as he turned back to the television. The man in blue sighed loudly and pulled a cart through the door. Row after row of red gelatin containers stood ready, wobbling gently. “Got your snacks here, and then your pills.”

“Didja hear that, Pearl? That isn’t going to end well for you.”

Pearl blinked a couple of times and stared at the television. Cookie Monster stared at her through the television, slowly rolling his fingers against the bottom rim of the antiquated television screen. “Huh?” The other residents were too busy staring at Joe as he made his rounds, conversing with each person as he handed out cups of red gelatin.

“Yeah, those pills? They change you. You change. You put them in your mouth and
swallow, and then things go all weird.” Cookie Monster pointed at the other people sitting down. “See them? All they do is sit there, shuffling back and forth. The only difference between them and zombies is that they eat cow hooves instead of brains.” He turned to one side and watched the man on the couch as they slowly slurped at the spoon of red, glis

tening substance on his spoon. “Not much different at all.”

Pearl looked out the window, disgusted. She had to narrow her eyes from the glare of the sunlight bouncing on the snow outside. It covered the ground and hung onto the pine trees in the yard. Someone made a snowman near the window, with a carrot for a nose and coal for eyes and a smile. Its head slowly, ever so slowly, turned to face Pearl. His mouth began to move, and she heard it clearly in a resonating, dulcet tone. “You know he’s being a douchebag, right?”

“Hey, don’t use that language!” Cookie Monster shook a furry finger towards the window. “Pearl is a lady.”

“So was your mom, until she met me – now she walks with a limp,” said the snowman. “Point is, she’s going to be just fine, and you’re freaking her out.”

“No she’s not. Those pills will do things to her. Things with her head.” Cookie Monster’s brow furrowed. “That won’t end well.”

“Hey Pearl. Hey, princess.” She nearly jumped – Joe loomed over her, wielding a spoon in one hand – plastic and thick – and a freshly opened gelatin container in the other. “It’s snack time!”

She stared blankly at the man. He waggled the spoon at her. After a few moments, she weakly reached forward and retrieved the spoon. “Thank you, young man.” The cup of gelatin soon rested in her other hand, the man smiling as his inventory lessened by one. He hummed as he pushed the cart back through the door, the squeaking of one wheel announcing his movement.
Cookie Monster and the snowman stared at her. She stared at the cup. The squeaking became quieter and quieter. She jabbed the spoon into the gelatin and raised it to her lips. “Don’t slurp – it isn’t polite,” said the Cookie Monster. She raised the full spoon to her lips and emptied it in one bite. The sound of slurping from the other tenants echo in the room.

“See, like these bastards.” The snowman sounded like he clucked his tongue, which was a bit shocking for Pearl since he didn’t have a visible tongue. “Can’t believe they stuck you in here.”

Pearl raised an eyebrow. “Who?”

The other tenants stopped sucking down their gelatin, all of them staring at her. The woman on the couch put her spoon to her mouth thoughtfully, then responded. “Who what?”

Confusion reigned for a few moments between Pearl and the other woman. Cookie Monster went back to explaining his intense desire to stuff cookies inside himself while the snowman shook its head. Many long moments toppled into each other as everyone eventually settled it out and returned to slurping their red substance.

Amid the noise, the Cookie Monster cleared his throat and turned his eyes to Pearl again. “The pills are coming soon.”

“And?” The snowman sounded annoyed. “Seriously. All you’re doing is scaring her.”

“Those pills are bad news. They’ll change her.” A furry blue finger pokes through the television, the hand gesturing wildly. “She needs to get out of here!”

As the snowman and the Cookie Monster argued, Pearl listened. She didn’t know much,

but she did fear ‘pill time’, but she didn’t quite know why. The feeling of dread touched her bones. She looked at the other residents – they seemed nonchalant, having finished their gelatin and turned their attention to the television.

A loud bong shook the building. Pearl clutched the arms of the chair – the rest seemed to handle it quite well. The Cookie Monster’s mouth goes round. “He’s coming soon! Quick, Pearl, you got to get out of here!”

“This is a mistake. Don’t do this,” the snowman pleaded.

Pearl bit her lip, glancing between the television and the window. Television, then window. Take the pills, or escape.

She turned towards the television. “What do I do?”

Pearl looked around. There were two exits – one lead to the rooms, but she didn’t know what the other held. Next to the exit was a wheelchair. She glanced at the Cookie Monster, who nodded sagely. She stood up and stumbled forward towards the door, almost falling over after the first couple of steps. The wheel chair steadied her as she grabbed one of the handles, and helped her keep balanced as she planted her backside in the chair.

She rested her hands on the circular bars next to the wheels as the door opened. Joe’s head peeked in from the door. Pearl readied her hands and pushed hard, forward.

The Cookie Monster reached over and flipped the channel. He disappeared from existence, and was replaced with the Blues Brothers driving through a mall. The sound of horns erupted through the tinny speaker. Pearl pushed hard, rolling forward into the hall and over Joe’s foot. He cursed loudly as the other people in the room looked at each other. “Who changed the channel?”

“Get back here, Pearl!” Joe limped his way towards Pearl, who kept rolling onward down the hall. The stark, sterile white walls were broken up occasionally with doors and medical posters. The television seemed to get louder as she escaped, the horns urging her on.

“Go Pearl, go!” the Cookie Monster belted out as she narrowly avoided a door opening. The
corridor veered sharply to the right. She braked with her right hand hard as she spun harder with her left, popping a wheel up slightly as she rounded the corner.

Someone opened a door in front of her and pushed a tray of gelatin (green this time). As the horns from the waiting room blared its last notes and the sound of a car crashing through a stand echoed through the hall, Pearl crashed through the tray of gelatin. Green splattered the floor, walls and everything in a ten-foot radius. She exhaled deeply, gelatin coating her from head to knees.

Pearl sat in her chair again, having been cleaned up. Joe folded his arms in front of her. “Come on, Pearl. You need your pills for your own good.” The Cookie Monster was on the screen again. His head shook emphatically. She sighed and took the pill, swallowing it hard with a water chaser. The Cookie Monster dissolved into the screen, and the sound of “Finally” echoed from the window.

She sat quietly, her mind clear. She glanced around the dull, monochromatic room, a storage unit for decayed, old fossils. The television, from an era where color was 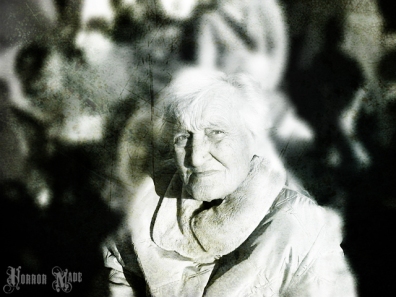 considered new, blared some kids’ show. The furry blue character tugged at memories in her head, but she couldn’t quite place it. The cobwebs in her head were quickly replaced
with the fog of medication. She looked up, trying to focus her eyes on the orderly, who nodded in satisfaction and moved to the next dinosaur in this premature graveyard. She rested her eyes on nothing in particular and sighed noncommittally. The snowman outside looked as dismal as she did as it stood stoically against the tree line. Its misshapen arms and cracked carrot for a nose  showed what she felt were years of holding a slowly dissolving line. Bitterness welled up inside her as her dazed mind reminded her that this is her life, every day. Every Goddamned day. She joined her fellows in their contemplation of their lot in life. Her eyelids surrendered.

The next day, Pearl sat in her chair, staring into space. The sunlight barged its way through the windows and into the thick air of the common room. The motes girded themselves for another day of battle.

Now you know Matt Fleming the writer But you need to meet him as a game designer too. Because how incredibly badass is that? He’s worked on multiplayer games such as Ultima Online and Defiance, and he’s the author of the Sci-fi noir web-comic Between Infinity.

Make sure to visit again on Friday, when I’ll be asking Matt about how he built this story and what thoughts were motivating his writing.

Until then, you should totally check out Matt’s website: flemingme.com and give him a shout on twitter: @sanspants

<<And Matt, thank you so much for sharing your story with us!>>