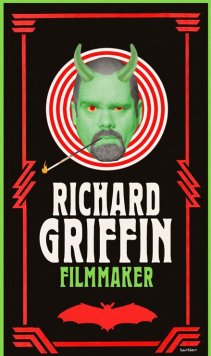 Richard is one of the talented minds behind  NUN OF THAT, THE DISCO EXORCIST and THE SINS OF DRACULA!

So, what the hell is The Walk-in Clinic of Dr. Moreau anyway? Let’s find out. 🙂

IF THE WALK-IN CLINIC OF DR. MOREAU WERE AN ICE-CREAM FLAVOR, WHAT WOULD IT BE AND WHY?

RG: Tutti-Frutti! It has a little bit of everything that makes something delicious. It has comedy, gore, action, monsters, mad scientists, beautiful women, beautiful men, really bad puns and so much more!

JA: I’m a big fan of your movies, Nun of That and Disco Exorcist in particular. Part of that is how you play with the time period cliches of when the story is set.

What time period is the Clinic of Dr. Moreau going to be set in?

RG: The Walk-In Clinic of Dr. Moreau is not set in any particular period, but will have a distinctly mid 70s vibe, not only due to the costumes and locations, but mainly due to the fact we’ll be shooting on film, and we’ll be lighting it to give it that real, honest-to-goodness grindhouse charm.

What has drawn you to that time period?

RG: I don’t really know why I keep making films set in the 70s and 80s to be honest!

I imagine it has something to do with the fact that I was born in 1970, and I’ve always been in love with the music, fashions and movies of that time period. The funny thing is, I’ve never felt that my movies were homages to films made during the 70s/80s, but more that they’re just period pieces.

Also, and I think a lot of directors of horror and suspense will tell you, it’s hard to craft thrillers in a time where everyone has a cell phone!

Can you tell me a little bit more about the premise behind The Walk-in Clinic of Dr. Moreau?

RG: The Walk-In Clinic of Dr. Moreau picks up where the 1996 version of The Island of Dr. Moreau ended, but in our version… Moreau didn’t die.
He’s really down on his luck, applying for scientific grants he never gets (Because the money guys can’t see the value of changing men into pigs.), and now he’s running a rundown Walk-In Clinic in a bad part of town, where he continues his insane experiments with the help of his faithful lab assistant Wolf Boy.
So, it’s basically Death of a Salesman meets Island of Lost Souls.

What are some of your main influences in creating this film?

RG: My main influences as of late is the work of Spanish director Jess Franco.
I’ve been deeply obsessed with his movies for the past few years, so I’m sure there will be his special influence on this one as well. I guess you could say Jess Franco is my spirit animal.
Just don’t ask me exactly what that animal is, or what that animals is currently doing, because my answer would be so filthy, we’d both just get embarrassed.

What made you decide to make this movie on 16mm film? 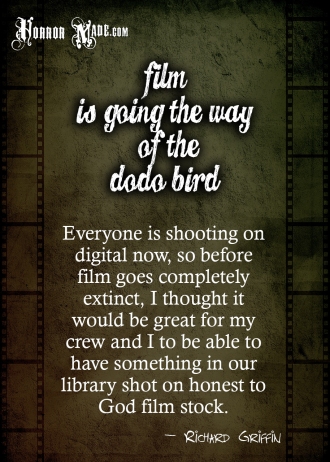 RG: The main reason we decided to shoot on 16mm is that, as we all know, film is going the way of the Dodo bird. Everyone is shooting on digital now, so before film goes completely extinct, I thought it would be great for my crew and I to be able to have something in our library shot on honest to God film stock.
Back when I first started making movies in the 80s, I shot on Super 8 and 16mm, and I’ve always loved the look of film over video. Even with the great advancements in digital technology, I don’t think anything comes close to the texture of film.

If you were shipwrecked on the Island of Dr. Moreau, how long do you think you would survive?

RG: I would survive until I ran out of cigarettes. And then I would drown myself before even any of Dr. Moreau’s mutants could kill me.

If you didn’t make it off the island, what would be your undoing?

Where can people learn more about your current project?

RG: They can learn about The Walk-In Clinic of Dr. Moreau at our production companies Facebook page: .facebook.com/SCORPIOFILMRELEASING

Where can people connect with you? 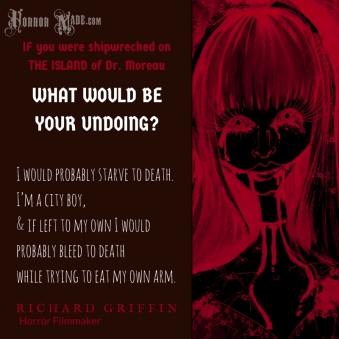 RG: My Twitter is @ScorpioFilm, my Facebook page is: facebook.com/SCORPIOFILMRELEASING, and our official website is: scorpiofilmreleasing.squarespace.com/
JA: So guys if you’d like to help chip in to make The Walk-in Clinic of Dr. Moreau a reality pop on by their gofundme page.
Ta ta for now you wonderful folks!