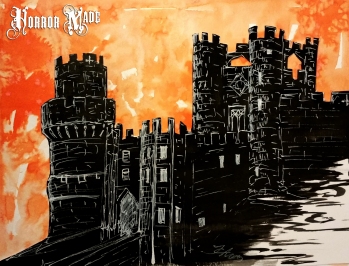 Warwick Castle, found in the UK, is a fascinating fortress build on ground soaked in blood and history. And has owners with a bad habit of coming to unfortunate ends.

It’s also, supposed to be quite haunted.

There have been numerous ghost sightings reported over the years, and the castle grounds are said to be home to the spirit of a black dog as well. (A spirit who’s appearance usually is an omen of impending death.)

Let’s explore this disturbing destination together, shall we?

I was going to to a fairly through history of the castle, but as I researched I realized that would be silly. This place has such a fascinating, complicated and long history!

So, if you’d like to get the full picture I recommend you visit www.ancientfortresses.org because they do a top-notch job of explaining not only the castle’s history, but the context those moments take place in the greater scheme of things.

For my infographic purposes, I picked out the bits I personally find the most interesting or wildly essential. Although… as you’ll notice, it’s still the an absurdly long infographic…

So, let your eyes skim the history as you wish while we talk about some good ol’ fashioned hauntings.

The main ghost stories you will hear when Warwick Castle is mentioned is the tragic tale of Sir Fulke Greville, the poet.

In 1604 James I gave Warwick Castle to Greville as a gift. Which was great, despite the dilapidated state the castle was in after 14 years of neglect.

Although he didn’t get to enjoy it for very long.

Greville never had a family so he left a few things for is steward, Ralph Haywood, in his will.

Apparently it wasn’t enough because Haywood ended up stabbing him. Afterwards, the steward was apparently so upset by his actions that he slit his own throat and died there.

Unfortunately for Greville he didn’t get to die immediately. He apparently died slowly and painfully a little time later due to infection thanks, in part, to a surgeon insisting that the wounds be packed with mutton fat.

Evidence of his spirit is reported in the South Tower of the Castle and in the room that was once his study in the following ways:

The modern-day castle has really embraced the tourism brought by its more macabre history. Along with the haunted house style dungeon they host seances and paranormal investigations quite frequently.

There’s been some pretty interesting things caught on camera because of this. I’ve added some of the more interesting videos to this YouTube playlist.

I only found one reference to the black dog of Warwick Castle, but here it is:

A slavering black dog was said to haunt the grounds of Warwick Castle after a woman named Moll Bloxham was caught stealing from the Earl. The Earl was so outraged that he ordered her to be publicly punished, at whose hands she suffered brutal indignity and torture. An embittered Moll Bloxham announced a curse on the castle. Soon after the disappearance of Bloxham, a black, slavering dog with red eyes began stalking the castle grounds. Attempts to kill the beast were met in failure and hound continued to terrorise the community. The curse was finally broken when the beast was lured from the highest tower into the River below. [ghost-story.co.uk]

So, I’ve been trying to get the hang of these time lapse painting videos, and I made one to go with today’s artwork.