There’s so much cool stuff coming up! I’ve now recorded as a guest with three awesome sauce podcasts and this weekend’s festivities are going to be stellar!

But If I just pour all the awesome on you all at once I might explode with joy so I’ll take it one bite at a time.

Rocking with the Deadites! 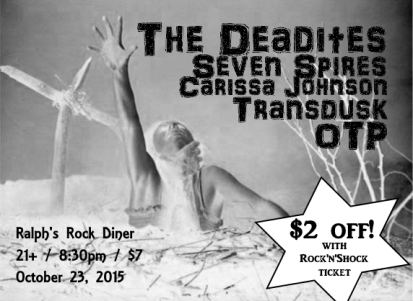 On Friday, October 23 from 8:00pm to lords know when I’ll be hanging out with some of the coolest people I know, listening to some amazing music.

You guys should totally join me if you’re anywhere near Worcester MA. 🙂 In fact if you mention you can because of my blog post I will hug you and draw you a picture on the spot.

If I have any cell reception what-so-ever I’ll periscope you in so you can join even from far far away. (I know some of you hail from exotic places like Widdowshins, CA, and that strange land known as Chicago.)

It’s going to be a fantastic show!

I’m going to be attending as a zombie pirate with Immortal Alexander, and (if I can get my creative bum in gear) I’ll be rocking the new and improved Sir Raverot. The sad fake raven I bought to mangle and perch on my shoulder a little while ago.

I put together a playlist for you of all the bands playing the show, this way you can have a listen while I babble on about a few other things.

I’ll be posting later on today about the Zombie Pub crawl I’m going on Saturday, since that’s a bit more of an involved conversation.

But… the other big news is I’ve graduated from Podcast groupie to Podcast guest!!!

The sultry grating sound of my voice will be heard on the 9th Story podcast kind of just chatting with Dan Foytik about the many varied things we’re both working on. (I apologize for my over-zelous post earlier that said it was already up…)

For the History Goes Bump podcast, I was invited to join the Halloween round table discussion. And despite showing up a week early, and then a day early I did actually manage to skype in at the right moment to be part of the show. It was a great discussion, although we did get very distracted with conversations about rubber duckies.

And last, but not least, I joined the Scream Sisters on their cast all about vampires! The Scream Sister are brandie-spankin’-new and made up of some totally cool horror fiend females.

As soon as all of those go Live I’ll share them here as well.

More about what a sexy rotting zombie wench I’m planning to be in the next post!