I teased you with this earlier today and here it is, the most heart-felt reason to join a mob of people dressed up as the cannibal undead.

Recently I was grabbing some food over at Keegan’s Pub in Middletown and my ears perked up when I heard a couple ladies chatting about doing prosthetics. I couldn’t help myself, I had to go over and join the conversation.

Turns out they were planning their costumes for this year’s Crawl of the Dead. It’s the 5th year running for a zombie-themed pub crawl and it just keeps getting bigger and bigger. Me, being the nosy horror blogger that I am, started asking a ton of questions so they waved over one of the founding members of the Crawl.

I’m not sure how he would feel about having his named mentioned, so for the sake of this post, his name is Micheal.

So Micheal comes over and tells me the story of how the Crawl of the Dead came into being. And I’m writing this all from memory, so please forgive any mistakes I make as far as accuracy goes.

It actually started because of a failed attempt at a classic pub crawl. 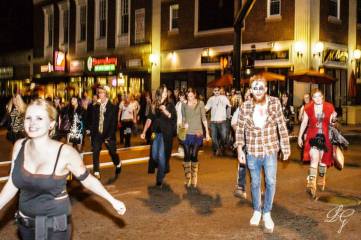 After an initial pub crawl flopped, Alan Ruske (One of Micheal’s closest friends) said “Hey, I think I could make one work, if there were zombies involved.”  So they put it together and to great success.

For the next few years they kept crawling down Main Street Middletown coated with fake blood and making more and more friends.

After a few years Alan had to bow out of running the crawl in favor of being home for his family, because it was about to get one baby girl bigger. So the crawl was run by Lucy, who is running the Crawl this year as well.

In the time between Alan’s new baby girl joining the world and this year’s event, Alan passed away.

So this year, the Crawl of the Dead isn’t just doing it for a good time, but is crawling in memory of Alan and raising money to set aside for his family.

After hearing this story I wanted to help get the word out to try and invite as many people as possible to join the crawl. So here it is.

Come shamble with me. We’ll thriller, we drink, we’ll celebrate a man who touched a lot of lives with a little undead fun for years, and we’ll help out that family who needs us all right now.

The 5th Annual Crawl of the Dead in Middletown, CT. 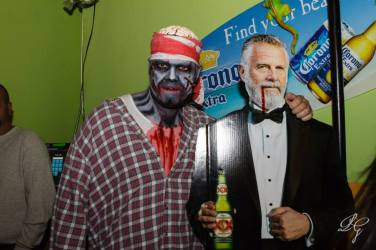 I also had the opportunity to talk to the folks currently running the crawl and here’s the conversation we had:

JA- How many walkers do you expect to see this year?

CD-  The FB invite says 182 are confirmed with another 100 maybes. I think its safe to say at least 200 Zombies will be walking down Main Street this year.

JA – What’s one of your favorite memories from previous crawls?

CD- My favorite memory from all the Crawls is how much people get into it with the costumes and how much fun everyone has together. It’s always funny to see people in stores and restaurants who have no idea about the Crawl watch 40 zombies walking past. They get pretty freaked out!

JA – Lol, that’s fantastic! What advice would you give to someone joining the crawl for the first time?

CD- To have fun meeting new people in new places, and remember its for a good cause. Oh, and get ready early – the Crawl starts at 6:00pm!

To Micheal, Thank you.

Thank you for sharing your story, and Alan’s story with me. My heart goes out to you and his family and friends for your loss and I sincerely hope this weekend will help heal some of the ache and help get Alan’s family in a better place financially.