Welcome back to the continuing story “Devil’s Due” by Immortal Alexander. If you missed Part One you can find it [here].

On to the story!

[ Warning Adult language and situations occur in this story]

After walking for a  few dimly lit blocks I began to make out what appeared to be a wonderfully perverse establishment lit up in red lights piercing through the darkness in the distance.

As I walked a bright red sign came into focus that read “Hell in Heels.”

Clever I thought to myself.

As I drew closer I could see a pair of scantily clad women sauntering in front. As I got even closer I noticed that they were wearing barely anything at all. Just enough to cover up their saucy bits.

I smirked, shook my head, and gave out a little laugh. I looked back up, a little embarrassed, wondering if they heard me. They seemed unfazed as they did a sexy little dance for the massive well dressed bouncer.

He wore a tailored three piece shiny red suit with a white silk tie, and shiny black shoes. He just stood there expressionless. Like a statue or some stone gargoyle whose only job was to protect the entrance to his master’s castle. He didn’t seemed the least bit fazed by the vixens dancing and grinding just for him.

What an asshole I hoped he couldn’t read minds or I’d be screwed.

I felt around in my frayed pocket once more and pulled out another quarter.

I flipped it into the air.

This time I snatched it out of the air myself and slapped it on the back of my left hand. I lifted my hand slowly to reveal… tails.

Shit. I thought to myself, If the world ends tomorrow I might as well hit rock bottom on my way to oblivion.

I stepped into the red light and nodded at the bouncer. He turned and slowly placed his gaze upon me in a way that felt like forever.

It may have been a chilly out but I was sweating bullets. A drop fell from my brow and splashed on the sidewalk. Wasn’t sure if he was going to bash my face in, eat me, or let me in the club.

His thickly muscled right arm raised changing from a fist to an open hand. He swiped it back in a gentle motion gesturing for me to enter.

Phew! Now I was feeling lucky. Maybe even a bit cocky. The bouncer opened the  door and I entered.

As I did a dimension of delights of the flesh appeared before me sending my senses into overdrive. My nostrils flared at the strong scents of perfume, fake fog, sweat, dirty money, and of course desperation. My eyes bulged from their sockets at the sight of naked amazonian women swinging from poles.

Pudgy old men flung dirty dollar bills onto the stage as flashing lights, and booming music obliterated all thoughts of anything beyond these walls. The world beyond simply melted away and leaked out of your throbbing ears.

Before I could blink five times a young woman sauntered over and took my hand. She pulled me deeper into wonderland.

Her fingers were soft and smooth. She was thin but still had curves in all the right places. She made eye contact and smiled a small inviting smile. There was trouble in her eyes, and little danger. I could just sense it.

Not really my type though

She gently pulled me to a small round table and sat me down. She slid around to my back, put her hands on my shoulders and leaned in close to my ear. She smelled just like freshly picked daffodils. Her breath was soft and sweet.

“Can I get you anything sweetie” she said in her best little girl voice.

It made the little hairs on my ears stand at attention, along with other parts of my body.

“No thanks” I said abruptly causing her to pushed off of me in an instant.

She gave me an evil stare and walked away in a huff looking absolutely disgusted.

Another one bites the dust. Then, inexplicitly, that very song by Queen began to blare from the club’s sound system. I tried to ponder this strange coincidence as every stripper in the room began to gyrate to the rhythm.

Strangely, I started feeling at ease as their hips swayed to and fro in a hypnotic pattern. I was so hypnotized by the lovely flesh that I didn’t even notice that the two men dressed in black and white had joined me at my table making themselves right at home.

I was completely oblivious until the bushy browed man blocked my view with his stinking corpse. “Hello my friend” he said with his hot breath that nearly knocked me out of my chair. I winced.

Shit, I thought to myself as I stumbled back and tried to force the smell away by expelling all of the air from my nose and mouth.

I quickly turned and noticed the two other men sitting besides me. I probably had that same constipated look my face, but it didn’t seem to faze them at all.

“Drinks on me” said the bushy-browed man. 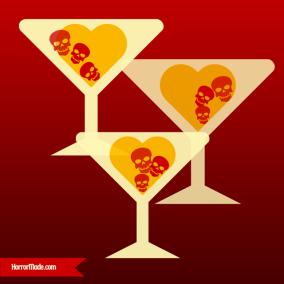 Before I could utter a reply a new waitress appeared with a cacophony of colorful, sugary, alcoholic delights which were infested with little umbrellas, and wedges of fruit sticking out of every crevice.

I opened my mouth to speak but the bushy-browed man just shoved one of those repulsive drinks in my face before I could utter a syllable.

In a blurry haze I had sucked down five or even six of those sticky concoctions. Maybe I just wanted to dull my senses to make this situation feel a little less awkward, or maybe I could sense the end coming so I just surrendered to oblivion. Who even cares right?

It seemed strange but in the blur that was this moment the man in black and the man in white seemed to be getting along marvelously. They were clinking glasses and even getting the occasional lap dance from two or even three girls at a time.

Before long everything got, fuzzy. It was all a mix of breasts, booze, and tiny umbrellas swirling around in my head with the bushy browed man laughing heartily in my face.

In my haze I looked back at the Man in Black and the Man in White, who were now staring straight at me giving me the double thumbs up as a stripper plunked her buxom bottom on my lap.

The room began to rock back in forth in a rhythmic movement to the beat of the music. I felt myself start to sway to the rhythm as well. The stripper noticed my rocking, stood up abruptly and sauntered away.

The rocking movement made me feel like I was on sinking vessel in the middle of the ocean, and her bottom was another vessel in the sea sailing off into the moonlight. I could almost make out the sound of creaking wood and the feel of sea spray.

Sweat poured from my brows and I felt like I was going to throw up, but in an instant, it all went, black. Nothing… just silence. So quiet, so peaceful, so still.

It was both frightening and wonderfully serene. 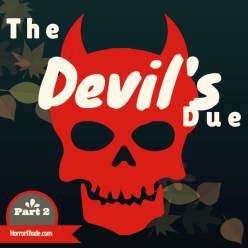 Pop on by next week to read the conclusion to The Devil’s Due by Immortal Alexander.

Thank you for reading!

And to those of you who sent me feedback on the last segment, Thank you! I.A. and I will be going back and doing so more editing based on your suggestions.