Hello my story-hungry lovelies. I have a feast of for you today.

We’re talking to the author/musician/ world traveler Derek Vasconi about his journey leading to his new book KAI.

We passed questions back and forth over email, and our conversation ended up going into some very interesting territory, in particular Derek’s experiences in Hiroshima, Japan.

I was really struck by the depth of this conversation, and I hope that you will have a similar experience while reading it.

JA – What is the driving “horror” in your book KAI?
That’s a hard one.
There are many different kinds of things we consider as horrific, right?

Japanese horror, for instance, is most commonly known for having what is known as the Yurei, or long, black haired woman antagonist. Think of The Ring, or The Grudge.
But there are other kinds of horror to be found in Japanese culture, such as the surreal, almost dreamy, ambiguous kind, which is what Kai is more based on (you won’t find no Yurei in my story).

I think that the best kind of horror is rooted in fear, both of the known and mostly in the unknown, and there is plenty of that to go around in KAI.

So I suppose that is what drives one half of the story, that being the strange things happening to Seul Bi as the story progresses.

The other kind of horror in my book is very explicit, but it serves a purpose other than just to exist as a shocking scene in the book. 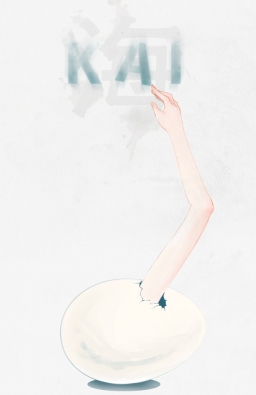 Or scenes, rather, as there are several instances as the book progresses, of absolute gore and violence.
I hate to use this example, but think about if you were reading a story where somebody kills your wife and it’s described in gory detail. That kind of horror then is the catalyst for the husband to maybe, for example, go on a brutal revenge killing spree.
You see what I mean?
The horror has to exist to justify what comes next. And I think in my book, where I hopefully have succeeded in taking it to a whole other level, is that it’s horror that will make you think, is it okay to have happened? Was it right, or wrong?
And without giving away the main plot point of Kai, the biggest question you’ll be presented with, is:

What if your suffering in this world is from something you can’t control, then what do you do?

Heavy handed stuff, I suppose, but all of it relates, as you’ll see, in both the narrative for Seul Bi and Satsuki’s story too.
If you want to take it a step further, you can also ask why is the story set in Hiroshima? Because suffering happened there to ordinary people that couldn’t be controlled by those people, and that plays a very large symbolic role of what happens at the end of the book for sure.
JA – I’m glad to hear you explored beyond the Yurei, there are so many interesting Yokai in Japanese culture!
And from what I’m gleaning from you description of the style of horror in your story, it sounds like you’ve worked towards a good blend between the supernatural and realistic styles of horror.

JA – I’m not exactly sure where to start after this. You’ve done so much already and such a variety of things!

School, then touring with your band, and then on to the world of mental healthcare.

I guess my first question is, out of all of these experiences, which ones did you draw on most while writing KAI?

DV –  I think for me the biggest thing I drew from in my life in order to write KAI was my time spent in Japan, and in particular, Hiroshima.

I had just got done doing a solid year of counseling anorexic girls and suicidal teens in Evanston (which is where I draw upon Seul Bi’s experiences in the book), and I needed a change of scenery, so to speak.

I really needed to get away, as I was completely emotionally drained. I had been working on the concept for KAI and how I would create the two stories by this time, so I figured that the only way I could really write about Japan and a girl from Japan is to go there. So I hopped on a plane and did exactly that.

When I landed, it was in Hiroshima, where Satsuki’s story takes place.
I spent a long time there, living and just breathing in the culture, and I was fortunate enough to stay with a Japanese woman who really treated me like family and showed me everything I needed to accurately depict a young girl from Hiroshima.

I felt truly blessed to have that kind of insight into Hiroshima, thanks to my host.

I think after I spent time in Hiroshima, going to Japan got to be kind of addicting, and I spent the next five years on and off there, mostly in Tokyo.
I think my experiences in Japan, more than anything else, enabled me to write KAI and I feel stay true to Japanese culture while writing Kai.

JA – What kinds of things did you learn from your host in Hiroshima? Could you give me an example of how you used it in your book?
DV –  So when I was in Hiroshima, my host told me about how her Grandmother survived both the bombing of Hiroshima AND Nagasaki. People who can say this are extremely rare.

In Japan, they are known as a Niju-Hibakusha, or double survivor.

I was really blown away by this, so I included a part in my book where Satsuki’s mother, Yoshiko, talks about their grandfather surviving both Atomic bombings of Japan.
Another thing I did was highlight a place called J-Cafe, which my host had shown me one night when we were walking around Hiroshima. 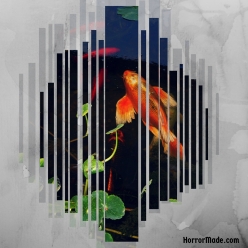 The front door looked like the door to a janitor’s closet. I mean, you didn’t even know it was the entrance to this beautiful, old school Japanese restaurant. And when you went inside the cafe, you could sit at a bar on one side of the place that had a running stream full of goldfish right on the bar! It was surreal to be drinking tea there and looking at these curious goldfish less than a few feet away right on the bar.
I think one other thing to mention was that my host was awesome and pretended like she was interested in buying an apartment, so we went fake apartment hunting, in order for me to get a sense of the layout and feel of what would eventually become Satsuki’s apartment that her family lives in.
Here are some of the photos Derek took while fake apartment hunting:

So everything relating to this in the book is taken directly from the hundred or so pictures I took on the apartment hunting.

I wanted to make sure every single element of Satsuki’s experience felt true, and my host was really appreciative of this and helped me in ways like this the whole time I spent living in Hiroshima. I couldn’t have written the book without her.

JA – Is there much evidence left from the atomic bombs? Or is it more of something that your find in the minds and stories of people rather than in the landscape?
DV – When I was in Hiroshima, it’s strange….there’s this crazy juxtaposition between the beautiful modern and the horrific reminder of what happened with the atomic bomb dropping.
For instance, there is a street in Hiroshima full of tall buildings and all are modern and beautiful, and then nestled in between a stretch of these buildings is the abandoned, half-destroyed bank that was standing the day of the Atomic Bombing.
When you go inside the bank, it’s just how it was that day, complete with blown out windows at the bank teller booths. There are buildings like this all over Hiroshima.
Here are some photos from Derek’s visit to the bank at the hypocenter: 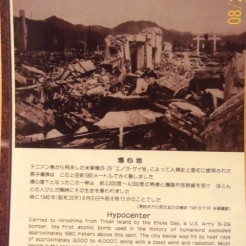 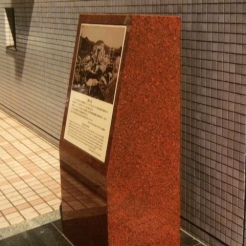 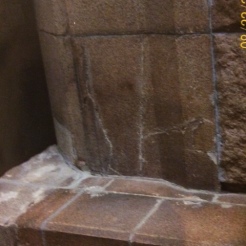 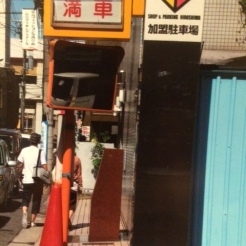 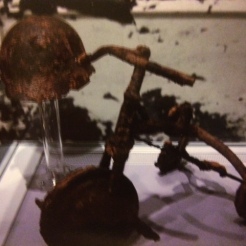 tricycle found near the hypocenter 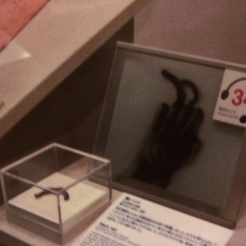 black nail grown from the atomic bomb
Of course, the biggest reminder of the atomic bomb dropping is the Gen-baku dome, which somehow still stood despite being so close to the hypocenter.
Here’s Derek’s photo’s of the Gen Baku Dome 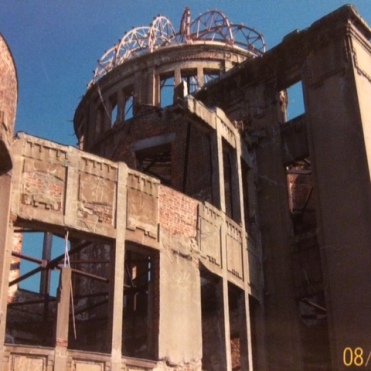 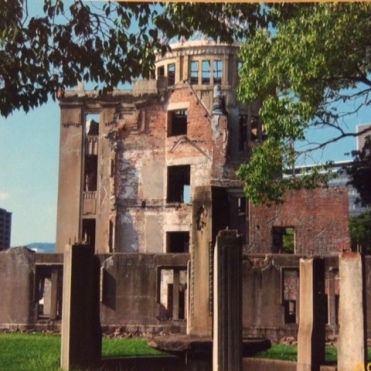 Gen Baku Dome
It was mostly destroyed, however, and when you go to visit the gen-baku dome today, it stands in front of the Peace Memorial park that people from all over the world visit on the anniversary of the bombing. The Gen-Baku dome is situated right in a bustling part of Hiroshima too, and it’s almost an eerie feeling to go by it when you’re on the way to, say, a mall nearby. 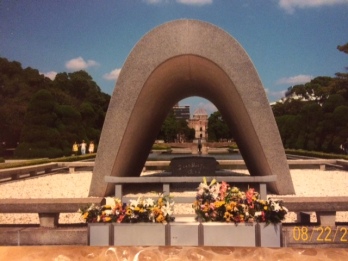 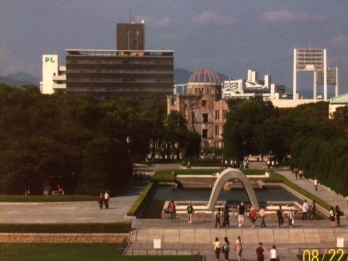 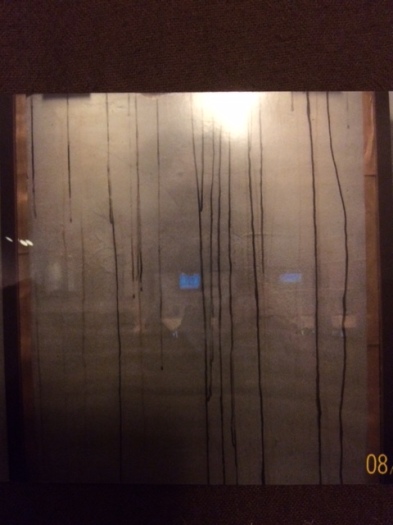 black rain on screen in peace park
And in terms of it being something you feel while you are there, i.e., the feeling of what happened there in WWII, yes, it’s there, but with the way the Japanese people are to foreigners, you might not ever see it or feel it.
Japanese people have this concept of HONNE/TATAMAE, which basically means that you are either inside their circle or outside their circle. If you are inside the circle (honne), you will know a Japanese person’s true feelings, versus if you are somebody a Japanese person meets in public, you will get only a polite smile and manners that are out of this world (Tatemae).
It took awhile before my host in Hiroshima opened up to me about her Grandmother being a double hibakusha. And her friend that we hung out with one night had mentioned that her parents wouldn’t allow her to date American guys because one of her grandparents died in the bombing. But I never experienced anything directly.
JA – It sounds like living in Hiroshima was a big adventure in your life. Looking back now, would you say that it changed you at all?
DV – Living in Hiroshima was awhile ago, but I haven’t forgotten it at all.
I really appreciated all the time spent living there, and I do hope that one day I can go back there, maybe even permanently. I think it’s a constant struggle in my head as to which city I love more in Japan, that being Hiroshima or Tokyo.
I think Hiroshima impacted me because it was the first time I visited Japan, the first time I experienced being surrounded by a group of people who didn’t speak English at all, but were extremely polite to me to the point where all I saw was smiles in my direction everywhere I looked. It made me wish to see that kind of thing exist back here in the US.
JA – What effected you the most? 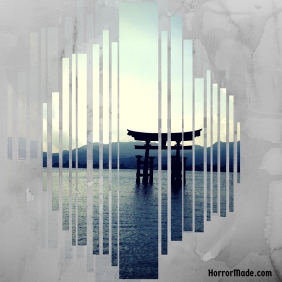 I think what impacted me the absolute most from my time in Hiroshima is the sense of history that is there and how it’s buried underneath all the modern feel of what Hiroshima has become.
Still, there’s this sense of sanctity walking the streets of Hiroshima. Like when I stood at the Hypocenter, which is the exact spot the bomb dropped, and how it’s down a very small street and not all that noticeable, yet you can… FEEL it.
You can sense the sadness that drapes the city, but again, with the politeness of everyone I met at Hiroshima, you would never know it was the victim of the first Atom bomb being dropped.

JA – Derek, thank you so much for sharing your stories with us. And I’m really looking forward to reading KAI, especially going in knowing it’s context.

[1] – “FASSW Conv” by Source. Licensed under Fair use via Wikipedia