Hello friends, today we have the author Paul Barrett visiting us as part of his Bewitching Book Tour.

He is an author, yes, but has also been a rock and roll roadie, children’s theater stage manager, television camera operator, mortgage banker, and support specialist for Microsoft Excel.

And I had the pleasure of doing a quick interview with with this delightful jack-of-all-trades.

Oh! And, before we get too far into things, he is offering some free copies of his new book A Whisper of Death. Click on over to a Rafflecopter giveaway for a chance to win.

JA –  What was the biggest challenge you encountered during the process of getting your series out into the world?

PB – Really it was just getting a publisher to believe in my work and actually taking a chance on reading it.

I’m horrible at writing query letters (although I’m trying to get better) and it really is a difficult game, because each agent and publisher looks for something a little different in how letters are done.

They are looking for any excuse to say no. Which I completely understand, since they can’t take everything. There’s not enough time to look at it all.

It can be disheartening though when you’ve received that 50th rejection letter.

JA – Do you have any advice for authors just starting the journey?

PB – To those starting out I would say, have a tough skin.

JA – When you sit down to write, what do you need your environment to be to get the most writing done? (In your office with sweet smelling candles, at your favorite bar on your phone, at a park?)

PB –  I’m fairly flexible when it comes to where I write. Because of circumstances, most of my writing is done in my upstairs office, with soundtrack music playing and usually a cat in my lap or laying in front of me. (Indeed, there’s a cat licking my arm demanding attention even as I type this.)

But I’ve also written in an IHOP at 3AM, scribbled in a notebook while working on set (when I wasn’t needed for my actual job) and also while sitting in a film studio with the noise of set construction all around me. So there’s nothing particularly special I need.

About “A Whisper of Death”

Before we get deeper into the interview, where I start asking questions about his book, specifically, I figured you’d probably benefit from a little context as to what his book is all about.

So here it is:

A Whisper of Death 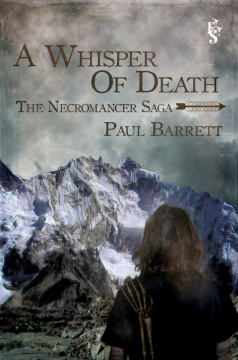 Born with the power of ultimate evil, he is the world’s only chance at survival.

Erick Darvaul is a Necromancer, a descendant of the original sorcerers who turned against their dark masters and exiled them. Now these beings have returned, it falls upon Erick and a cadre of newfound allies to rally against these powerful entities and defeat. Through fire, ambush, and betrayal, Erick and his companions claw their way to Broken Mountain to reunite with others who share his ability. There, Erick battles the mortal foe of his ancestors pushing the limits of his Necromantic magic, a force that seeks to corrupt him every time he summons it.

Ok, back to the interview:

JA – If you, personally, ended up in the shoes of your main character, how do you think you would fare?

PB – Considering I don’t actually have the power to raise the dead, I suspect I would fare poorly at best. 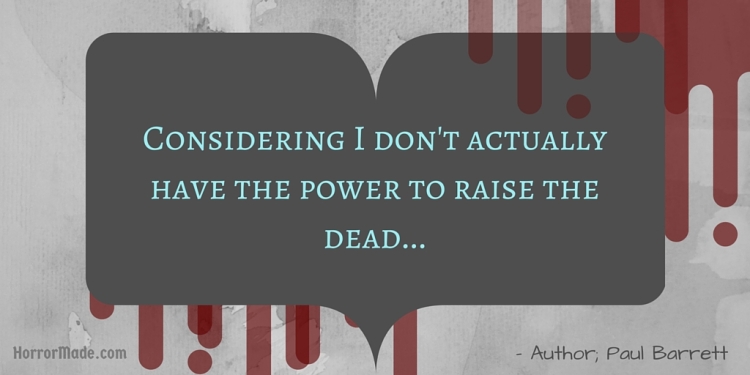 But above and beyond that, about the only part of what happens to Erick I would actually enjoy would be the traveling and seeing new places. I do love to travel, but I’m not big on camping, I’m really not a fighter, and I’ve become a serious home body who enjoys being at my house at the end of the day (except when I’m doing that cool traveling I want to do.)

I do tend to take stressful situations with a fair amount of calm, so I might do alright in dealing with those aspects of what he goes through.

But really, about the only thing we share is that when I was his age, I had curly brown hair.

JA – What kind of information (life, researched or otherwise) did you draw on while writing “A Whisper of Death”?

PB – A lot of the book came simply from things I learned playing Dungeons and Dragons and what I remember of history classes. 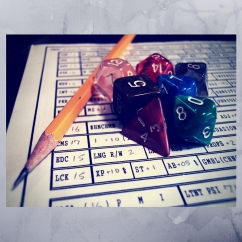 I did do some research on plants and their supposed healing properties, because I want the plants Erick uses for his work and the healers use to help people to have some basis in “reality.”

There are a couple of cool books that are actually supplements for role-playing games that are surprisingly helpful for medieval style things. But I didn’t do a lot a major research. I hate research, although, like my query letter writing, I’m trying to get better at it.

Here’s a Trailer for “A Whisper of Death”

Paul, thank you so much for stopping by and sharing some of your thoughts on the process of making your novel.

Paul has lived a varied life full of excitement and adventure.

Not really, but it sounds good as an opening line.

This eclectic mix prepared him to go into his true love: motion picture production. He has produced two motion pictures and two documentaries: His film Night Feeders released on DVD in 2007, and Cold Storage was released by Lionsgate in 2010

Amidst all this, Paul has worked on his writing, starting with his first short story, about Ziggy Stardust and the Spiders from Mars, at age 8. Paul has written and produced numerous commercial and industrial video scripts in his tenure with his forcreative agency, Indievision. He has two published short stories (As You Sow and Double Cross) and one self-published novel (Godchild). He lives with his filmmaker/graphic artist partner and their three cats.

And in case you read first with the intention of raffling after, here’s that link again: a Rafflecopter giveaway