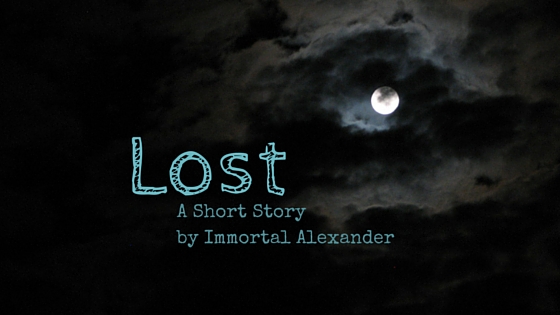 One night I became restless and unable to sleep. I tossed and turned over and over again accidentally rolling myself into a blanket burrito. Unable to move my arms I could not stop myself from sliding off the bed and onto the hardwood floor with a resounding thud.

Shit, I thought to myself.

The floor was cold and I couldn’t move as I was bound up tight. I looked up and saw that my room was pitch black except for a soft beam of moonlight that was splashed against the back wall. For a moment I just listened.

Good, my parents were still asleep.

I wriggled and writhed until I could get enough arm space to free myself from my fuzzy cocoon. I crawled forward army style and pushed myself upright. Still feeling restless I made my way to my window and pushed aside the curtains so I could peek outside.

It was a beautiful night. I unlatched the window and slid it open wide breathing in the cool night air.The moonlight was so blindingly bright that I could barely see a thing. As my eyes adjusted to the splendor I could make out a small gathering of rabbits at the top of the grassy hill grazing below the giant moon and the clear night sky. 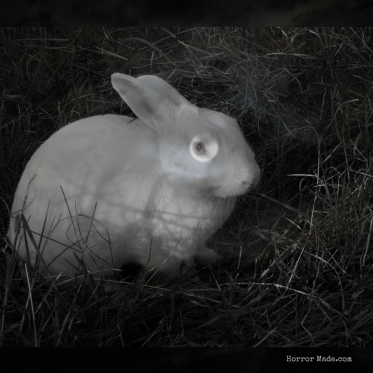 In unison the rabbits looked up and stood at attention. I scanned the hill to see what they were looking at but there was nothing there.

When I looked back they were scampering off into the woods. I felt compelled to follow. I don’t know why but it was like I could not help myself. I just needed to know where the rabbits went off to. Call it curiosity or what you will, but I felt I had no choice but to satisfy this feeling.

I looked down at the ground below me. I was only on the second floor and there were some very thick bushes down there so I thought it would be a good idea leave through the window. Sure I could have used the front door, but what fun would that be?

I was still wearing my navy blue plaid pajamas and for a second I thought about changing first but quickly dismissed it as a waste of time. It’ll be fine I thought to myself as I shimmied over the edge of the window and slowly lowered myself into a dead hang firmly grasping the windowsill.

I stared down for a second and immediately regretted my decision to leave through the window. I thought, I’ll break my neck for sure. But I let go anyway and hoped for either a soft landing or a swift death as I fell.

I was fine, except for a few light scratches and bruises, but as for the bush, it was completely ruined. I had broken every major branch rendering it almost completely flat. Dad was going to be so pissed.

I planted my hands on the damp dirt and pushed myself up brushing twigs and dirt off of my pajamas. It was a lot darker out than I had thought. From down here the moonlight was only peeking from the top of the trees. There was no turning back now. I had to find out where the rabbits had gone.

Full of determination and curiosity I trotted up the hill in my now ruined fuzzy slippers. They were my favorite pair and I was a little bummed but I soldered on making my way to the edge of the woods.

When I got there I leaned against a spruce and peered in. It was fairly dark except for a few thin beams of moonlight that crept through the branches. I took a deep breath and began to make my way through the woods.

There was this pretty little meadow in the center of the woods that I thought would be a good place for rabbits to gather, so that’s where I was headed. The woods were thick and everything was covered in a moss and fungus which kept rubbing all over my pj’s. There was a thin fog in the air that made my butt all damp. It felt pretty gross but I trotted on anyways determined to satiate my curiosity.

I slowed my movement as I got close to the meadow hunching down and taking small careful steps. As I suspected the rabbits were there. There were about twenty of them drinking and munching on grass and flowers. I was admiring their colors and patterns when I noticed something odd. The crickets had stopped chirping. I mean it was pretty quiet out there anyway but now it was deafening. The rabbits stopped eating and drinking and just seemed to listen.

Then there was a sound.

It started out as a low kind of hum. Almost like when you get a ringing in your ears when someone is thinking about you.

Then a soft beam of light pierced the dark and landed on a singular rabbit that sat there as motionless as death. It had brown and white matted fur and its eyes appeared to be jet black and wide open. It just stood there. Then a bright flash of light filled the woods.

When my eyesight came back the rabbit was gone. The other rabbits still stood there, motionless. One of the rabbits broke ranks and had slightly turned its head to look at me. We locked on each other’s gaze and I could swear that I could hear its heartbeat quickening.

The light returned this time landing on the bunny that was staring at me. It was all black except for a few white spots on its head and its expression seemed to say “help me” in the most adorable way. It was shaking and all I wanted to do in that moment was save it from whatever was out there.

Without thinking I ran over and scooped up the little rabbit.

It didn’t resist. In fact it seemed relieved and its breathing began to slow in my arms. Then came the bright white flash again which blinded me in an instant. All I could see was white. My body felt so light that it felt like nothing at all. I could feel the rabbit disappearing from my arms which made me extraordinarily sad. I failed, I thought rubbing my eyes and sinking to my knees.

I felt more than a little nauseous. I finally felt solid ground below me and It was very bright in this strange place. It took me a little while to adjust my sight. When things came back into focus I could see that I was in stark white room.

To Be Continued… [click here to read the 2nd half]

About Me, Immortal Alexander

I am currently working on another web series that will be a dark supernatural drama. I am also working on a compilation of Slam Poetry that encompasses my old free association writing and new material. I will be writing many more short stories for the Horror Made blog that I hope to publish in other horror publications as well.

Here’s some of the film work I’ve done: