Welcome back friends! I don’t usually pack interviews back to back, but after the conversation I had with today’s guest I just didn’t have the discipline to hold out for more than the weekend.

Nico is a composer and if any of you listen to The Lift or The Wicked Library podcasts then your ears have already been acquainted. Nico was born and raised in Yorkshire, Northern England, and is currently living in Lancaster.

He composes under the name We talk of Dreams for podcasts, videogames, and some very fun pieces that are just for the sake of creating them.

Here’s an example of his re-imagined music for the Binding of Isaac to give you guys a taste before going in:

And now for the interview!

JA – When did you first get interested in creating music?

NV –  I think I first began when the family got cable tv, I was around 8 and I saw Jimi Hendrix on mtv.  Which led to years upon years of me attempting to play guitar like him, I have many hidden awful cover tapes of me trying to play The Wind Cries Mary [Which is] the reason why I call myself a composer as opposed to a musician.

JA – LOL amazing. That’s a stunning way to get started. So is the guitar still your preferred instrument? Although, I know you’re rocking the orchestrations for The Lift and The Wicked Library.

NV – It’s more that I can hear the notes in my head, but playing them on guitar, they sound… disappointing. I was never going to be a performer, so I learnt music theory and piano to the point where I could map out melodies and chords. I then saved up to buy a Mac and orchestra sounds, and just plugged away until I learnt how to orchestrate,

I love the finished product, orchestra is my preferred choice of sound because there’s so much depth to it and it’s quite raw, you have to know your music theory and your harmonies, and it’s almost systematic to hearing the music in your head to writing the score

JA – Hardly a ramble. That was a fantastic response, actually. How did you get involved with composing for The Lift and The Wicked Library.

NV – Dan [Foytik] posted in a video game music forum about The Lift, and I actually saw it as a little side project to keep me busy, and then I heard a few episodes and realized how big it was, so it started to become the main focus. Then Dan casually mentioned that The Wicked Library could use a music director, so I became music director of both podcasts.

JA – What kind of composing did you do before the podcasts?

NV – before I did the podcasts I really did just focus on video game music. My style was really electronic, like early daft punk stuff, just a lot calmer. I was using an iPad for years as I didn’t own a laptop that could handle music production. I was using an app that would let you play 4 different instruments and then repeat. My life back then was being a full-time bartender, finishing a shift, eating microwaved food, and then just playing looped music. It sounds a bit mundane when I put it like that, but it really helped me cut my teeth

JA – Actually that sound like the kind of obsessive dedication art tends to require. So good on you.

How much of your tension-building with the score comes from gut reactions/intuition and how much taps into your music theory foundations?

NV – I suppose everything comes from an idea. I always play everything on a piano before I figure out what instruments I’ll use. If you don’t have that initial idea/melody then you can chuck all the theory you want at it, but nothing will become of it.

JA – That’s the best explanation of that musical relationship I’ve ever heard.

What kind of video games did you compose for?

I’ve only been doing video games for about a year so the list is small. However, 2 of them which are out this year include: ‘Distant Suns‘ which is a space exploration co-op, where I get to do a full orchestral score; and ‘Nekodama Catastrophe’ which is a throwback to hack ‘n’ slash games, I got to do a lot of high energy electronic songs

JA – Very cool. How does composing for the story podcasts compare to game composing?

NV – Game composing is very a ‘in the moment’ thing: you need to create music that seamlessly loops and displays one type of a emotion at a given time, as you don’t know how long a player may stay in one spot or how long they fight a monster..etc

Podcast composing is very different. It’s a very linear experience, you know exactly the moment where the emotions change, you know how it’s going to end…

The other thing to consider with the podcasts is that the story and the narration comes first, the music is looking to enhance it, not fight against it for attention, so I generally stick to more chords rather than melody, and focus on getting the setting and atmosphere right for each scene. In particular with The Wicked Libary, the era that the stories are set in change from episode to episode, so a great deal of research goes into what the instruments and the style of the music was at the time. It can be quite challenging, but it keeps the show (and the music) fresh

JA – What is one episode you are especially happy with your work on? 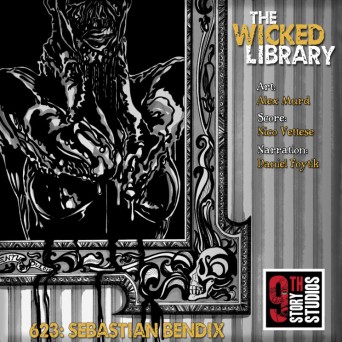 NV – The most recent one on TWL ‘Sweet Sticky Sarah’ it’s set in America in the early 20th century, which is my favourite era to write for, I also made the horror much more subtle than I have done in the past. The temptation to throw in as much eerie sound is high, but I limited it to some static, wind, and a fake radio recording of some Dixieland Jazz

JA – I’m glad you mentioned that one, when I listened to it there were a bunch of moments where I felt myself holding my breath and then I paused and thought, “why?” A good chunk if the time it was how your score was playing with the space in between narration. Great suspense building there.

NV – That’s a great compliment, Thank you so much 😀

JA -You’re very welcome. ^.^ Do you have have any links, website etc. you’d like readers of Horror Made to check out?

NV –  My Facebook is where I keep everything up to date with what i do: Facebook.com/wetalkofdreams, and there’s my website: wetalkofdreams.com

JA – 🙂 thank you so much for chatting with me about your work!

And to tie it all together, here’s some more music Nico has composed. This collection is from his demo reel, with a little section that includes Victoria’s theme song. ^.^