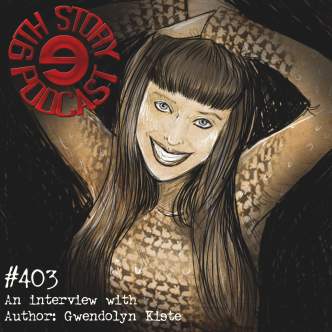 Well, maybe you won’t pull over at a truck stop, specifically but when I listened to the interview Dan did with Gwendolyn Kiste I sure did.

Maybe, you’ll jump of the bike you’re on and type something up on your phone, or maybe you’ll open up a new window on your computer at work and get lost in a cloud of creativity for a while.

As writers and storytellers we can all get a little stuck in  the process of creation. I personally have been having a tough time with getting my story for The Lift to be more exciting and relatable. But I just kept getting stuck on the intro. You know, that part where your characters are walking somewhere and are getting ready to do something. *yawn*

But after listening to Gwendolyn talk about some of her hacks to get a story kick-started I felt my brain light on fire. So I hope you’ll feel the same way after listening to her interview. Either way, there are some great thought-sparking concepts talked about here that are writing gold.

So pop on over to 9thstory.com to have a listen to episode 403, or you can tune in on iTunes or Stitcher. And hopefully you’ll also drop whatever you’re doing and get over the writer’s block you’ve been carrying around too. 😉