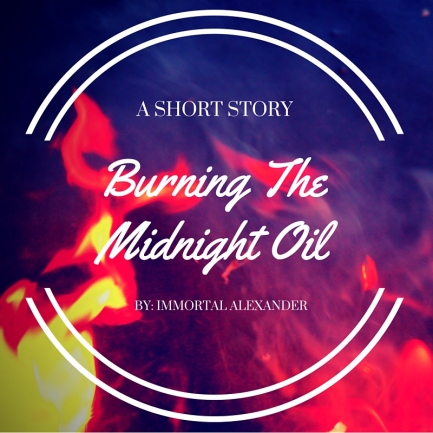 Dimly lit corridor, flickering fluorescent lights mixed with a orange glow of incandescent bulbs. A constant electric buzz makes my ears ring. It’s late. Like three a.m. late. My nostrils burn from sulphur laden air emanating from the incinerator. That’s the first thing you get used to as a wastewater specialist, the smell.  Sulphur mixed with…other things. I am so damn tired. All I want to do is lay down and close my friggin eyes. I NEED SLEEP! I swear if my boss makes me stay on this graveyard shift one more night I’m going to SNAP! I’ll go check the levels later. Make sure the methane and oxygen levels are good. Don’t need this place blowing up on me now. Not when I’m hours away from switching to second shift. Oh man, getting home at midnight instead of eight in the morning, and gettin more than three hours sleep. It’ll be like Christmas every day, for my brain.

Sometimes when I’ve gotten almost no sleep at all I swear the shadows move. I mean I know it’s all in my head but christ I can’t help it! Every time I see things move out the corner of my eyes I have little f-ing heart attacks right before my brain kicks back in and realizes there’s nothing there. I mean what could be there except Mic and Jim putzing around. My eyelids are so heavy. Body’s rocking back and forth with a low rythm. Just a little micro nap before my next shot of caffeine. The stuff in the breakroom is mostly just black sludge water but I don’t care. If it’ll keep me on my feet I’ll swallow it down with a smile even if it makes my gut burn on the way down.

Next I’ll walk over and check on Mic who’s working the deragger. If that thing gets jammed up our whole system will  get knocked out quicker than a rabbit makin babies. We’ll catch holy hell from our supervisor Jim Manning IF that happens. Can’t afford another penalty from the State. Not now. Not when I am so close to something that feels like a real life. A functioning brain, the sun, sleep, and a normal sex drive. All things I NEED, desperately.

I stumble down the hall and take a hard right at the junction, and there it is. The one brightly lit room in the whole joint. The break room’s callin me like a lighthouse beckoning a ship that’s about to crash into some rocks. Stumbling in there is like being spat into heaven by accident. A place where you felt almost awake, but you just knew you didn’t belong. The florescent bulbs were like blindingly bright angels. The coffee and snack machine are your saviors.

I pour myself a cup of joe into a styrofoam cup. The stuff is especially gross tonight. More like crude oil than coffee. I savor every burnt gooey drop of tar water before I gotta get back to Hades, I mean work. I crushed the cup, tossed in the waste bin, and stepped into the dimly lit abyss. I am immediately greeted with darting slices of midnight dancing in the corners of my eyes. My heart leaps into my throat and I nearly regenerate the caffeinated sludge. I cough hard, and grab my chest taking in deep heaving breaths. Damn it, I need to take it slow tonight. Nice, and slow. Don’t want a real heart attack, not today.

I make my way to the burgundy double doors at the end of the hall with a little more urgency in my step. Don’t want Mic clogging up the system. Don’t want to be chained to third shift forever. If I keep saying it maybe everything will be ok, I hope. I swing the doors open with a forceful push and there’s Mic lookin relieved at my timely arrival. “Hey can you give me a hand with this? Think it’s about to jam up” Mic says with sweat pouring down his brow. “Outta my way” I say shifting Mic aside to asses the damage. “Just gotta release the pressure and get this thing clear.” Mic nods and watches as I work my magic. After thirty minutes I finally get the thing clear and the system starts to flow a lot better. “Thanks man, you really saved my bacon.” “No worries Mic. Just keep an eye on this thing. Need to make another round before I can come back and check on ya.” Mic nods wiping his brow, and taking in a deep breath of relief.  I left Mic who looked like a eight year old kid asked by his daddy to drive him home from the bar. Scared but glad for the vote of confidence that he can handle himself for a bit. These are decent guys but they needed a little extra motivation to do things on their own. I guess they’re all a little scared of not having me with them on third anymore. I mean who’s gonna be there to wipe their little noses when they mess up? Not me. Hopefully Jim will take some initiative. Seems like smart guy. He’ll pick it up.

When I reach the sludge tanks something stinks. I mean more than usual. The smell hits me like a truck makin me gag as soon as I open the doors to the chamber. “Jim, jeez, what the hell is goin on here!” No Jim. I run to the nearby office to grab a air filtration mask. I’m still gagging, my eyes are burning. I can’t open em. Can’t see a thing so I just feel around. I feel the wall, touch the panels, the cabinet door, got it. I quickly slide the thing on, seal it to my face, and take a couple of shallow breaths. Just as I do I fall to my knees hard like a sack of potatoes. Crap that hurt! When I finally catch my breath I can hear a muffled scream coming from the sludge chamber. “Jim! I climb back to my feet. No reply. The air in the chamber was thick with yellow smoke. I could see it through the glass door. My eyes are still watering. I push the emergency button and red lights began to flash along with a blaring alarm to warn the others of the problem. I just gotta find Jim. I scramble for the door and try to open it but something dark and shapeless is holding the handle tight. I can’t make it out what it is, but it’s real! At least I think it’s real. The handle releases as the dark thing darts away from the door. I push it hard and run head long into the thick yellow abys. “Jim, Jim where are you buddy? Are you ok? Make some noise if you’re all right buddy!” I almost trip, something solid by my feet. I look down.“Jim!” I know it’s him because of the STP patch on the right shoulder of his uniform. Man that’s lucky. He’s got a mask on, and it’s foggin up. Still breathing, good, that’s good. Now get up buddy. I put my full force underneath his body to get em to his feet. Feels weak. There’s some dark goop on his back, slippery. It’s all over my hands now. I drag Jim toward the doors. A loud moaning sound comes from behind us. I look back and can make out something big moving in the billowing clouds of yellow smoke.

A large dark form taking shape through the fog. I see what looks like a great big maw opening and something red and hot ignites inside it. It moans louder.“What the crap is that!” I drag Jim as fast as my out of shape body can carry him. We move quickly through the double doors, and down the hall. Sounds like the thing’s moving. The heavy stink of surfer and excrement follows us as we struggle forward.  We pass the break room and Mic’s just sittin there. Eatin a donut, and drinkin coffee like nothin’s happening! Even with the alarm blaring and the lights flasin like rave club. “What the F Mic? Get your ass up and move!” He darts up spilling his coffee all over himself and dropping his donut onto the floor. He scrambles to his feet. “You got it boss.” Mic rushes over and helps me carry Jim. “Let’s get out of this hell hole!” We drag Jim down the last stretch of hallway. The smell and a slushy dragging sound follow close behind us. I’m sweating perfusly and Mic got this confused look on his face. Maybe he’s constipated from the coffee, or he’s just confused about what’s going on. Can’t tell, but the moaning sound is getting louder as we get closer to the exit, and oh god the smell is unbearable. There’s a heat that’s building up behind us so we pick up the pace. Jim’s startin to come to.

Finally we make it to the front of the building and slam the doors open with our shoulders like a couple of linebackers. I get Jim to the ground, remove his mask, and mine too. He coughs all over the place gettin some spit on my face, I wipe it off. “Damn, sorry man!”

The moan is now deafening. It’s booming like what I’d imagine some ancient greek god would sound like. Every pane of glass in the place exploded sending shards everywhere. We covered ourselves as glass flies everywhere, then dragged Jim as far as we can before running out of breath. Me and Mic both look up just as the moan started getting even louder. This time we could see it. The large red maw, and thick goopy black appendages seeping through the open windows. In the distance we could hear a fire truck blaring its horn. The sound must have scared the thing cause it started to reced back into the building slowly. It moaned now in a softer tone. Eventually the thing was out of site, but it left some of its dark ooze behind. The gross stuff was sliding out of the broken windows and sploshing onto the pavement in large tar like globs.  The firefighters and a ambulance arrived on the scene. We all breathed a sign of relief. Jim even smiled a little. He’s got a weird little smile but for once I was glad to see. Whatever that thing was I hopped to never see it again. Not on second shift, and not ever. I guess you better be careful what you flush down the drain cause it sure stinks to holy hell when it comes back up.

Thanks for reading. I am an aspiring writer and feedback helps me immensely. Let me know what you think of my stories. The good, the bad, and the ugly are welcome to leave comments.