Today we’re joined by L.M. Pruitt, author of the new horror novel, Silk. (The review to which I’ll be posting at 9am) And she’s here to share her delightfully dark thoughts on horror. Let’s jump right in:

First, get your mind out of the gutter—and don’t try and tell me it didn’t go there for at least one second. This post isn’t about sex. It’s about those movies which, for me at least, were so terrifying they’ve since received a permanent place on my “don’t watch at home, alone, in the dark” shelf.

I know, I know, I’m already hearing the groans and the derisive chuckles and can almost see some of you shaking your head. And I fully accept that for the majority of the first movie, it’s basically people lost in the woods, which isn’t scary so much as something to make you question your judgment and taste in films. But the tiny hints dropped along the way, the creeping dread, and those final few minutes… yeah, I may have just freaked myself out a little bit just thinking about it. And while the sequel is, by and large, forgettable (seriously, I don’t remember anything about it), I do remember having nightmares for two nights after my single viewing.

Paranormal Activity is another movie which, for the most part, seems much longer than it is and you spend your

time wondering when the hell something is going to happen. Which, and I might be in the minority here, is part of the charm and appeal and draw. You’re so focused on waiting for the big jump, the big scare, that you miss all those little moments which serve to ramp up the tension. Again, the payoff is really in those last few minutes, when the train has fully gone off the rails and you’re forced to realize how very wrong you were about everything.
Finally, there’s The Ring. The scares come more fast and more furious than in either of the previous movies mentioned but that doesn’t mean you get used to them. Or at least I didn’t. By the time (spoiler alert—although after so long it shouldn’t be necessary) the little girl/evil spirit comes up the well and actually out of the television, I was full on hyperventilating. For real—my mother actually reached over and hit me and told me to stop being ridiculous. It worked, mostly, but I still haven’t revisited the film.

There are others—because while I love horror movies, my imagination is way too active for my own good. Instead of earning more of your ridicule and headshakes, I’m simply going to ask you to tell me about one horror movie which creeped you out beyond belief. One random commenter will receive an e-copy of SILK as a prize—and something else to keep them up at night. 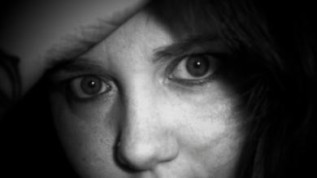 L.M. Pruitt has been reading and writing for as long as she can remember. A native of Florida with a love of New Orleans, she has the uncanny ability to find humor in most things and would probably kill a plastic plant. She knows this because she’s killed bamboo. Twice. She is the author of the Winged series, the Plaisir Coupable series, Jude Magdalyn series, the Moon Rising series, and Taken: A Frankie Post Novel.

Snag a copy of  Silk