Julie Dawn, the author of today’s post actually wrote a guest post here a little ways back titled, Writing is one crazy-ass-long-hard-journey. And it is. I have yet to finish or publish any of my multitude of stories that have been living in my head throughout the years. So, Julie already has my respect on that count.

Julie gave me a copy of this book in exchange for an honest review. So here it is. 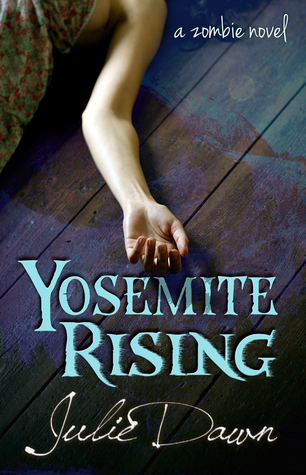 Book Description: A legend that will change the world.

It’s been 150 years since the Ahwahnee Indians lived where Yosemite National Park now stands. Their last surviving Chief appears to Elizabeth Hutchings, a twenty-year-old biology student, the very day her parents die. Within 24 hours, she too is clinging to life as his whispers echo in her thoughts.

An ancient prophecy has begun. A plague rips through the world’s population, taking everyone and everything she has ever cared about. As agents of a mysterious organization called Meadowlark hunt her, she must find the strength to fight the infected even as she struggles to keep herself alive.

Just when she thinks she can’t go on, a man from her past arrives. He holds the key to understanding the prophecy. If she can unravel its secrets, she not only may change her own fate–but the fate of the entire world. [amazon]

Ok, so that’s the description…

But that’s not what this book is about. It’s about sex, zombies, and pee.

Oh zombies. Not always my favorite sub-genre in the horror world, but every once in a while one surprises me. I actually did have a zombie novel as one of my top picks for last year. However, many of these novels fall into the same traps which Yosemite Rising has fallen prey to.

I would love to have read more development and back story about the characters and see a few more logical choices being made. (I’ll return to that thought where I talk about the ‘erotica’ label.)

Out of the batch there where two characters that made it through enough of the story to get emotionally connected to. Elizabeth – our leading lady who is having the absolute WORST few days of her life. And Benjamin – the secret agent/love interest/man hunting her down. Their interactions were interesting as the story progressed and, generally, they behaved in ways that were consistent to their characters.

Ah yes, sexy sexy sex time all over the place. If this book had come with the label “erotica” or at least “paranormal romance” I would have been prepared for the massive amounts of senseless horned-up sex that happened in this book. I’m not saying that’s a bad thing- those scenes were, in fact, rather well written. However, the lust drove this book more than the characters or even the plot did, so whenever there was a new character introduced it was really just a matter of time before they tried to seduce or rape Elizabeth. And if they couldn’t get into her, there were zombies to take advantage of.

If this is something you’re looking for, you may enjoy this more than I. I was quickly turned off by the senseless humping and how every single person, male or female, just needed to rut despite all of the life threatening situations.

This story would also find it’s right audience if it gained the label “Splatter Punk” (for one of the best written examples of that I’ve ever read, check out  Die You Bastard Die).

Splatter Punk, according to Wikipedia, “was a movement within horror fiction in the 1980s, distinguished by its graphic, often gory, depiction of violence and hyperintensive horror with no limits.”

If you went in expecting to read that style of book then you’d actually be pleasantly surprised. There is tons of blood, gore, graphic violence, and plenty of depraved sex. Also, in the vein of this genre you would be un-surprised to read about all of the peeing.

There was so much pee.

When someone turned into a zombie, they peed.

When they went into the woods, they peed.

When they found a toilet, they peed.

I just wish that there’d been more time given to them drinking something so that all of the peeing would at least make more sense. Sorry, I needed to relieve myself of those thoughts, because they really stuck out to me. It wasn’t a theme the entire way through the book though, because part of the way through there’s a scene with a lady… peeing… (surprise)… and then she gets attacked in the bathroom by a zombie because it smelled her menstrual blood. That scene seemed to calm down the descriptions of peeing everywhere, I guess it was a kind of (I’m sorry, but I’m saying it) cherry on top? (sorry.)

I do not mean to tear the book apart, I simply want to make sure the right audience finds this book. Because if you are looking for a zombie, splatter punk novel with a fresh twist, then you will actually enjoy this book. The pacing is wickedly fast and pulls you through the end of the world as experienced by the people in and around Yosemite National park.

The twist I mentioned was the main reason I was excited to read this book in the first place. In this world, Elizabeth’s destiny to save humanity is tied to an ancient Native American legend about Coyote and his obsessive love for a human woman who looked just like Elizabeth. The history of the park and the tribe were the details that kept me going. I wanted to know, is she actually something special? Is there a greater meaning to all of the chaos? How on earth will the story end?

I have two star ratings to give to this book, one is my personal feelings for the book based on my specific tastes and the second is a more removed rating based on the opinion the correct audience for this book may have for it.

My personal rating: 1 blood spattered star out of 5

I’m just not the right reader for this story. I don’t love everything zombie. I also don’t tend to seek out splatter punk. Rape without any consequences afterwards for the rapist turns me entirely off. If it happens in the story I need karmic justice or ripping, tearing, hateful revenge. And yes, I consider people sexing up zombies rape. Zombies have rights too.

To people who are interested in reading Zombie Splatter Punk Erotica: 3 out of 5 Blood splattered Stars.

The hyperintensive violence, gore, and sex are brimming over the pages of this book. And if you enjoy the survival aspect of zombie stories (a-la the Walking Dead) you’ll be familiar with and enjoy the pacing of this novel. The main detraction from this book is the characters. If they got a little more developed and behaved in ways that were true to their core I would have given this book a few more stars.

It is really hard for me to hit “publish” on a review for a book where I didn’t love the book. But I wanted to let you guys know, and Julie (sorry if you hate me) who the right readers for the book are.

[BTW if you use this link, any purchases you make during that session help support me. Amazon will send a little bit of what you spend to me without any extra cost to you. Thanks for the support!]

Connect with the Author