Wytovich plays madam in a collection of erotic horror that challenges the philosophical connection between death and orgasm. There’s a striptease that happens in Brothel that is neither fact nor fiction, fantasy nor memory. It is a dance of eroticism, of death and decay. The human body becomes a service station for pain, for pleasure, for the lonely, the confused. Sexuality is hung on the door, and the act of love is far from anything that’s decent. Her women spread their legs to violence then smoke a cigarette and get on all fours. They use their bodies as weapons and learn to find themselves in the climax of the boundaries they cross in order to define their humanity…or lack thereof.

Wytovich shows us that the definition of the feminine is not associated with the word victim. Her characters resurrect themselves over and over again, fighting stereotypes, killing expectations. She shows us that sex isn’t about love; it’s about control. And when the control is disproportionate to the fantasy, she shows us the true meaning of femme fatale.[rawdogscreaming.com]

On Writing Brothel: To Make Love is to Give Birth to Death

Writing Brothel was a step in a different direction for me, thematically at least, because I usually tackle the notion of the erotic in horror from a distance, rather than straight on. What I mean, per say, is that sex is something that usually influences the horror in my writing rather than it being the source of the horror itself. I contemplated writing this book for years because I was afraid of the stigma that it would place on me as a female writer in the genre, but the more I thought about it, the more I realized that was the reason why I needed to write the book. I wanted to cas 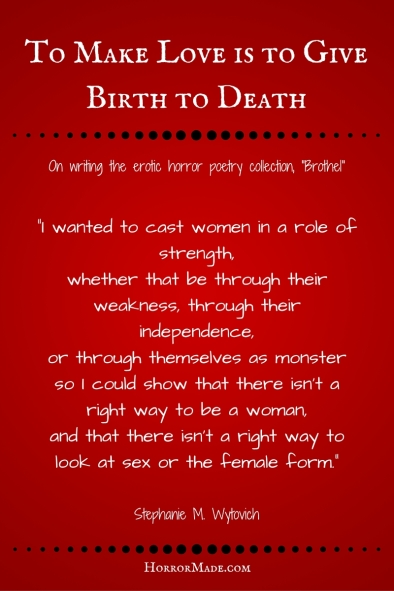 When I sat down to write Brothel, I did a lot of philosophical and psychological research between the relationship of sex and death—a topic that has always fascinated me and continues to do so. I wanted to show sex in the positive, in the negative, as the heavenly, and as a front seat to Hell. In Brothel, there are women who love sex, who hate sex, who numb themselves to it, and who use it as a way to make a quick buck, turn a fast trick, and manipulate and murder through bodily hypnosis.

While writing the poems, I read a lot about the familial relationships that often form in brothels, especially between the madam and her girls. I latched on to that comradery, and coupled it with my studies in Freudian psychosis and the readings of Bataille, and I worked out a dynamic through the arc of my book that puts my readers in a position of witness to the beautiful grotesque. I like showing the juxtaposition between innocence and guilt, between shame and acceptance, and I think the poems in this collection span a wide array of emotional intensity that flutter back and forth between pleasure and pain.

My process for writing poetry is always the same, with very little variation. I come up with the topic, the emotion, or the mood of what I want to write about, and then I alphabetically write five titles to each letter, and this helps me to outline the collection and format the arc of the book. It’s a little strange, but for me, it forces me to slow down and make a plan, both logistically and creatively for the characters in my work. I strive to find a consistency thematically, but I want the edge of darkness and light to slowly creep in and saturate the work. For someone who doesn’t map out the poems themselves, it’s a rather complex, structured process, but for me, it really works and it keeps me motivated. 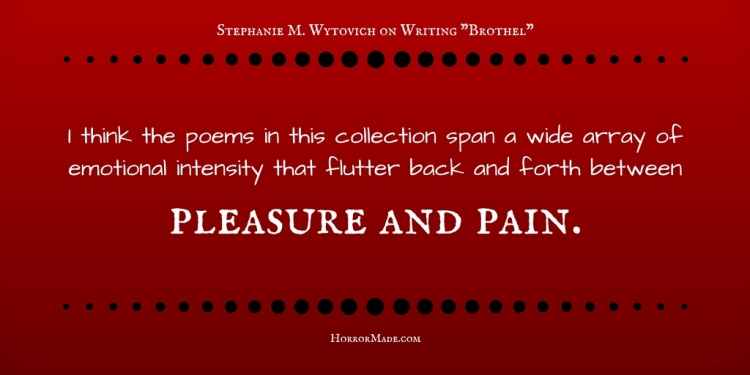 Brothel, for me, is the book that I always wanted to write, but was too hesitant to do so. I’m exceptionally proud of this manuscript because I think it tackles sexuality in a way that embraces all orientations, tastes, and fetishes in a way that enforces the belief that everyone is entitled to love the way that they want to love. Sure, there’s a darkness to my words and my stories, but horror has always been about survival to me, and the women in my poems survive, and they survive by using their body as a weapon. They define the femme fatale, embrace the voice of the siren, take notes from Medusa, the mistress of stone. They are sisters and mothers, daughters and orphans, and when their clients knock on their door and hand them payment, it’s hit or miss who is actually getting fucked in the end.

For new readers of my work—and to my seasoned veterans—I promise a carnal beauty in these poems, but I also promise violence, hunger, and the exploration of fantasy and sexual prowess. My characters are filled with desire, passion, and a need to commit to love, to seek out love, and most importantly, to survive love, and as we all know, sometimes in order to do that, we have to make sacrifices.

Stephanie M. Wytovich is an Instructor of English by day and a horror writer by night. She is the Poetry Editor for Raw Dog Screaming Press and a book reviewer for Nameless Magazine. She is a member of the Science Fiction Poetry Association, an active member of the Horror Writers Association, and a graduate of Seton Hill University’s MFA program for Writing Popular Fiction. Her Bram Stoker Award-nominated poetry collections, Hysteria: A Collection of Madness, Mourning Jewelry, An Exorcism of Angels, and Brothel can be found at www.rawdogscreaming.com, and her debut novel, The Eighth, will be out in 2016 from Dark Regions Press.