This zombie apocalypse novel will surprise, delight and disgust

It takes a unique twist to make post-apocalyptic zombie stories fresh (in an oozing flesh kind of way) and today’s story hits that mark. Because where this story went, utterly surprised and delighted me. But I’ll return to that thought momentarily.

The author of the book I’m reviewing today has been a guest on Horror Made before. He’s written What if all roads led to terror? Where he shares the origin of this novel, and he was recently offering a big bunch of giveaways celebrating the release of the second book in the Dreadland Series. He did give me a free copy of this book in exchange for an honest review, so let’s get into

All Roads Lead to Terror 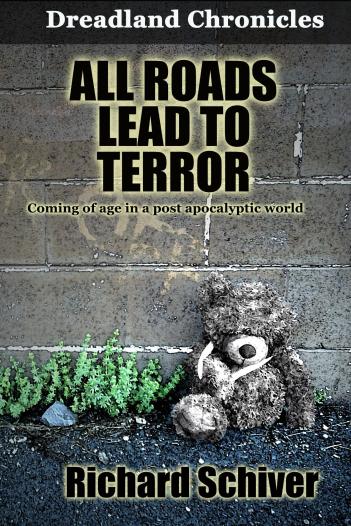 Genre: Horror, A sprinkle of Zombie for flavor, Postapocalyptic, Spatterpunk

Book Description: On the day of his birth the dead walked and society crumbled. His mother took one look at him and pronounced him Meat. He survived, she didn’t.

Fourteen years have passed and obscurity means survival in an increasingly dangerous world. For the survivors compound at Bremo Bluff that obscurity is threatened when a savage band abducts a group of children from the compound.

Accompanied by his three friends Window,Einstein, and Billie-Bob, Meat embarks on a quest to rescue the children. A journey that will lead them into adulthood, with a brief detour through the Dreadlands, as they come face to face with the harsh reality of a brutal world beyond the barriers that had served to protect them.

In the dead city of Richmond they will confront a savage cult of children who worship a creature of the night. These creatures once lived along the mysterious edge of a well lit world, in that shadowy realm between night and day, between dreams and nightmares. They are now awake in a world where the population that once served as their food source has been reduced. [amazon]

Coming of age in a broken world

At first, this story appears to fit right into the post-apocalyptic zombie universe. But it broadens out into a more interesting coming of age story. Meat, Window, Einstien, and Billie-Bob, are trekking out into the uncharted land East of their settlement, the Dreadlands, to rescue the children who’d just been kidnapped. They are seasoned trackers with some impeccable marksmanship skills. And they are all between the ages of 12 and 15.

The age of these characters entirely changes the dynamic of this book from a more familiar world of survival and human in-fighting to one where the narative of the young plays a more important role. Children of this world are preyed upon openly, but in this society? They fight back. If this book was written any differently, I don’t think I could have read what happened to these kids. Brutal, horrible things happened to them as they struggled to survive in the predatory world around them.  However- it was written in a way that kept my rapt attention. Why?

These characters were people

The core group of boys  were each individual, deep characters, with pain and pasts you would normally only seen in adults who’ve lived a  hard life. I was quickly invested in them and it was seeing their personal struggles and growth that made this story sing. Well, that and the-

Prints of this artwork can be purchased on Society6

Now, you have your zombies, but they aren’t the real danger in this world. As in most cases of “zombie apocalypse” literature, it’s the people fighting over resources and struggling to adapt that you have to fear. What I loved about how Richard approached that concept, was that his didn’t to focus in on the adults of the world. Instead he kept his focus on the kids. If the depraved adults did horrible things, we experienced it from the children’s point of view. The kids, even the ones threatening our protagonists lives, were more human than the adults in this world. They were also, far more savage.

There was a flavor of “Lord of the Flies” expressed through the savage tribe of kids who kidnapped the children in the first place. They were viscous, brutal creatures grown from the cycle of abuse this book explores. And the religious practices they had cultivated in the absence of love and protection is truly horrifying. It’s the kind of horror that at once makes your stomach churn and your hand itch to draw it. (Or maybe that’s just my response to these kind of stories…)

The climatic battle I won’t even touch on, because to talk about it is to spoil the most delightful revelation that this book has hidden in it. But what I will say is, read all the way to the end. It’s so totally worth it, and it’s because of the ending that I want to read the next book in the series. I love it when a book pulls the rug out from  under me. It keeps me from getting jaded or from succumbing to Horror Fatigue.

4 out of 5 Blood Spattered Stars – I reserve a star because there are some grammatical issues that another round of editing would fix up, but 4 solid stars because this book is absolutely worth reading. It is brutal with a purpose. It’s post-apocalyptic and set in the zombie genre without being clichéd. And that ending. That ending is spectacular.

[BTW if you use the Amazon link, any purchases you make during that session help support the blog. Amazon will send a little bit of what you spend to me without any extra cost to you. Thanks for the support!]

Trigger Warnings that are also Spoilers