Death is the one great change we will all eventually experience, but it might not be the end of it all. In fact, it’s often the beginning of something entirely new. Some new adventure, with perhaps some remorse and heart-ache attached, but a new adventure none-the less.

Certainly, we’ll all know the answer to that eventually, but what do you think your consciousness might experience after you’ve died? What do you think the world will offer after it’s died? Do the dead have anything to offer us?

These are the thoughts rattling around in my head after reading today’s book.

Triplicity is a new book  that will be coming out in the near future from the talented folks at Books and Boos press. I will admit, I’m a little biased in my opinion on this one because I’ve read a good chunk of the work published by them and have yet to find one I haven’t entirely LOVED. This collection is no different.

Ok, it’s a little different. This time around Stacey, one of the Books and Boos publishers, asked if I’d be willing to write a blurb for the back of the book. I was ecstatic that she asked. She and Rob Smales have become two of my favorite authors with work like Secret Things, Ordinary Boy, Insanity Tales II, and Echoes of Darkness. It also  excited the heck out of me because one of my goals at the top of the year was to hit a point with my reviews that my criticism was something worth noting- like on the back cover of a book for example. 😀 That’s some New York Times level s*** right there! But despite the ego boost on that count, I’m still going to bring you my honest opinion of this book, and the stories contained within. 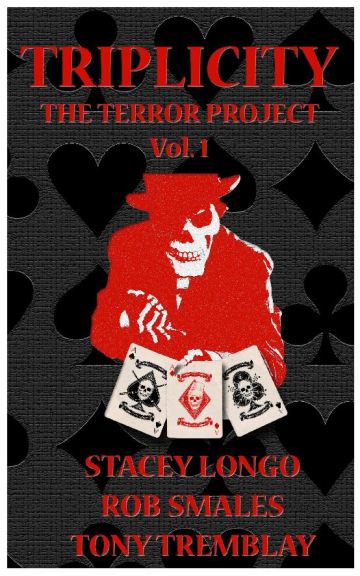 Book Description: Three novellas bring to life tales of what happens after death. The three novellas span a broad spectrum settings and themes, but they all expand from the idea of playing the the cards you’re dealt with when death comes to call. Bad choices, selfish existences, cats and cows you cannot trust, and a family secret that will utterly surprise you.

The three novellas are distinctly different from each other, in a way that almost makes them not work as a collection, and if they were shorter stories I don’t think they would have worked this well. But here’s the thing about novellas- They’re meaty enough that you can get sucked into the story so you forget where you started. It was an odd experience reading this collection in that way actually. After reading Stacey Longo’s story, “Brando and Bad Choices,” I thought, ‘that was excellent. I have no idea how the next story is going to be able to put that out of my mind.’ Then, about a three pages into Tony Trembaly’s, “Steel” I entirely forgot what happened in the 1st story because his so captivated me. Again, after finishing his story I foolishly thought, ‘Man, that’s going to be a tough act to follow.”  And yet, Rob Smales’s story,  “The Christmas Spirit” also knocked it out of the park. Which again, after finishing the story, left me entirely immersed in it’s world.

Since these stories are so distinctly different, I’m going to go through each one and explore them individually.

This story struck home for me, because in a lot of ways I feel like I am the main character, Stella Pendergrass. A narcissus so wrapped up in the things she wants to do that she entirely neglects her nephews. She shows up at her sister’s house, waltzes in and then terrorizes her nephews out of wanting her to take them to the park  with a tragic true tale of a kid dying in the very area they want to play in. (Ok, I wouldn’t actually do that to my nieces, but the showing up late and not being around enough thing I’m entirely guilty of, so I guess the connection stops there).

She then leaves, makes some bad choices and winds up in the afterlife. Maybe purgatory, maybe Hell, maybe something else entirely. But what’s interesting about this place is how it makes Stella face her decisions, especially the bad ones she made where she felt no guilt over them.

It made me think about my life and try to look at my decisions from outside of my own head and ask, “what bad choices have I made that I don’t even recognize as being bad?” “Who have I hurt with my own selfishness?” “How can I be more aware of how my decisions effect those around me.”

Reading this story has really made me start being more aware of my own life, and that’s kind of amazing, isn’t it? One little ol’ story can knock you back on your heels for a moment and utterly change you. I love reading. ❤

Ready for a massive shift in tone? I wasn’t. Yet I ended up enjoying the heck out of this next story by Tony Trembaly.

At first it almost felt like a zombie apocalypse story. It had the familiar trappings of one, at least. A small group of survivors, mostly kids, is struggling to stay alive on an Earth that has been utterly destroyed. But then the elements of dystopian Sci-Fi started eeking in. Acid rain you sure as heck don’t want to get splashed by. Mutated cats, dogs and cows that are total nightmare fuel. And a story that goes from an exploratory meander to plot-driven gut-punch in a matter of no time.

This story. Oh, this story is a delicious blend of horror, sci-fi and fantasy, with intrigue and an incredibly surprising twist at the end. I’d go on, but then I’d start ruining things. So I won’t. 😉

Shhh, it’s ok, I know it says “Christmas” in the title, but you’re still going to enjoy this one.

This story from Rob Smales has a very Charles Dickens feel to it. A modern feel also, but there’s certainly a classic flair to the telling of this story.

Like many Victorian novels, it starts off as a letter (in this case, an email) being written by someone who simply must tell her unbelievable story in earnest to warn the people she is writing to. And man, it’s a whopper of a tale. Her story begins before her twin sons’ 1st Christmas where her world is as bleak and grey as a Dickens novel but just as hopeful. Her and her husband are barely scraping by with enough money to support themselves and, even though there isn’t enough extra to really celebrate Christmas, the narrator is trying her to best to DIY for the holidays. Handmade decorations, and lots of Christmas spirit to go around.

That’s when things take a sharp turn to the horror side of things. It appears that someone is breaking into their house while they’re sleeping and leaving evidence of their visits in the twins’ room. The terror this young couple feels is infectious, and I really was both enjoying and hating the fact that I was reading this in a place that wasn’t familiar to me. I mean, seriously, what was that moving in the corner of my eye?

This story takes you on a emotional journey and where it ends ties up the whole collection in a very interesting way.

Triplicity is a collection of 3 very distinct stories that, despite their differences, create a creepy yet heart-felt collection of horror and suspense that is entirely worth reading. 5 out of 5 blood spattered stars.

By keeping an eye on Books and Boos Press or harassing them relentlessly on Twitter and Facebook until they sell you copy. It’ll be worth the effort.