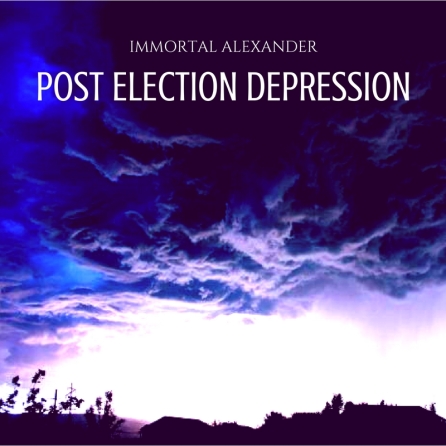 You know that feeling you have on the morning of new year’s day? That feeling when you wake and expect the world to have come to an end. Well I feel that same feeling the day after each major election. I wake up, make myself some coffee, and walk out onto my porch to make sure the world is still there, still the way I remember it. There is a kind of malaise to the world the day after an election. A profound emptiness.

Every time I expect the world to be drastically different when I step out of that door, but isn’t. It never is. This year everyone keeps saying that everything is going to change. That this year was a monumental election year that would transform the world as we all know it. That nothing would ever be the same again.

Nothing felt very different when I awoke today. I felt the same emptiness I always felt every four years. Hollow and profoundly alone. I was attuned to the fact that alliances and enemies made around the water cooler would eventually flow back into a mild tolerance. Everything will slowly make it’s way back to something resembling normal.

Time for my tradition, time to step out into the world and make sure it is still there. Make sure we have all survived this social political circus. Silence, odd. The air is unusually stale. My lawn is littered with political signs, streamers, and empty beer cans. More than usual. Perhaps some blew over in the night. The leaves rustle and with the breeze comes an odd smell, sulfur. Small particles of ash float in the air mixed with dry leaves as the wind picks up.

A low dull sound echoes in the distance and a cluster of birds fly off into the distance as if spooked by something unseen. The sound grows louder and my neighbors begin to exit their suburban dwellings to investigate. We all stare in the distance with our mouths agape, each of us in various states of dishevelment. Some wearing bathrobes. Others in sweatshirts, boxers, and fuzzy slippers.

The sound grew louder drawing my gaze skyward. The sun seemed to be blotted out entirely by a large shadow which completely enveloped my little neighborhood. My eyes fixated toward the sky, and my mind became unhinged. There looming above us all was a large beast. It’s ash colored scales pulsated. It’s eyes were a deep green, and its mouth was hot with smoke billowing out as It breathed slowly. The smoke creating a large cloud cover of deep reds, off colored white, and dark blues. The creature inched forward like molasses as if it had only recently awakened from a long deep sleep.

I guess they were right. Everything would change from this moment on. Nothing would ever be the same.

Writers note: This story was written yesterday morning. Well before the current election was decided. Not sure what that means. What are your thoughts? @HtvImmortal