No, I’m not even going to explain what that means. Why? Because we have a guest post from horror author Steven Ramirez who’s going to do a much better job of explaining what that difference is and how that worked into the journey writing his book series took him on.

So, hold off on answering that question just yet, and let’s hear what Steven has to share with us today:

TELL ME WHEN I’M DEAD—Stumbling into Hell

In 2013, I published what I thought would be a single novel about a regular guy fending off zombies in the fictional Northern California town of Tres Marias. Though I’m a pantser by trade, I had the whole thing figured out in my head. I would take the recovering alcoholic Dave Pulaski on a soul-bending journey of sorrow that would cause him to inadvertently put his wife, Holly, at risk while he struggled to stay sober, even as the body count was going up. But when I finished the book, something happened.

And so began the long, hard road to the TELL ME WHEN I’M DEAD trilogy. In 2014, I published Book Two, Dead Is All You Get. And in 2015, I brought Dave to the end of his trials with Book Three, Even The Dead Will Bleed.

I mentioned earlier that I’m a pantser—as opposed to a plotter, who carefully outlines their book the way a draftsman creates a blueprint. I tried doing that a few times with other stories. But the same thing always happened. Fifty pages into the outline, I would get fed up and start writing the damn novel. Want to know another thing about outlines? You don’t always end up going where you thought you would, once you actually begin writing. Plotters will tell you they love being surprised. Well, in my defense, I am surprised every moment I write.

Don’t get me wrong. I’ve got nothing against plotters. In fact, some of my best friends… Okay, never mind. The point is, both types of writers turn out brilliant fiction. How you get there is more a function of how your brain is wired. Moving on…

Dave Pulaski is about as regular as you can get, character-wise, though I needed to give him a huge Achilles heel—his drinking. Oh, and he has a temper. But other than that, you would probably see a lot of yourself, your relatives or your friends in him. And what I wanted for Dave was to take him through a trial similar to that of Ben in the original ‘Night of the Living Dead.’ You remember that movie, right?

“They’re coming to get you, Barbara!” 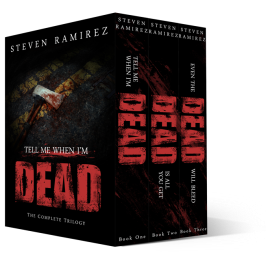 Ben was a regular guy, too. And now he was trying to survive in a remote farmhouse while being plagued by flesh-eaters. Pretty cool stuff for 1968. And like that story, I wanted to avoid the whole Zombie Apocalypse thing and return to the genre’s roots. I feel I succeeded in centering the action in a small town.

By the time we get to Book Two, Dave has exchanged his iconic axe for an AR-15. And he’s pretty handy with it, too. He and Holly have joined forces with Black Dragon Security, an outfit commissioned to retake the town and restore order. Only not everyone is cooperating.

In Book Three, Dave is hardened. He has no problem dispatching those who threaten him or the ones he loves. And—spoiler alert!—I moved the action to Los Angeles. Dave is purely out for revenge now. He wants to kill those responsible for the outbreak. But, of course, things never go quite as planned, and he finds himself trying to rescue a Russian girl who is in terrible danger.

If you like seeing a character evolve dramatically over three books, The TELL ME WHEN I’M DEAD trilogy is for you. Sometimes, readers are reluctant to shell out for an untested author. I get that. Well, good news.

Book One is free everywhere. Want more good news? Check out this quote from a recent review of Book One: “Very nearly as good as Stephen King.” I can’t do better than that. Happy reading.

Box Set: Tell Me When I’m Dead: The Complete Trilogy 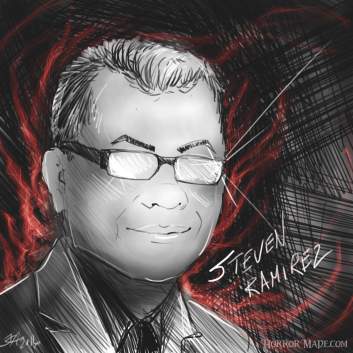 Steven Ramirez is the author of the horror thriller series TELL ME WHEN I’M DEAD. He has also published a

number of short stories, as well as a children’s book, and he wrote the screenplay for the horror thriller

film ‘Killers.’ To hear about new releases, visit stevenramirez.com/newsletter/. Steven lives in LosAngeles with his wife and daughters.

So… are you a pantser or a plotter?