Warning: Mature content. If boobs and blood offend you, return on another day, or check out this cute horror kids book I reviewed once upon a time: Spooky Skwerl Stories.

Today I have a written interview with the bass player, song writer, and singer of the Theatrical Horror Rock Band, Darkness Visible. David Black! David hails all the way from Melbourne, Australia. Today we’re chatting about the biggest, craziest music video his group has ever created. So if you liked the post I did about Anthrax’s Blood Eagle Wings then you’ll feel right at home here today.

Here is one of the music videos from Darkness Visible to give you a tiny taste of the newest music video they have cooking up.

On to the Interview

JA: How did you start your journey with Darkness Visible? 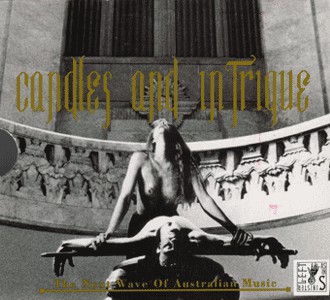 DB:   Darkness Visible started off by accident. I was at a gothic night club called Apocalypse – totally drunk, fully gothed up and staggering around when a guy came up to me with a flyer and said he was creating the first ever Australian Darkwave compilation CD called Candles and Intrigue. He felt that because I looked so hardcore that I should be in a band. I felt the idea was a bit funny and went to show the flyer to some friends for a giggle, but they all took it seriously. So next thing, I signed the flyer and had to deliver a fully recorded song and do a photoshoot within a month. The CD came out, the song took off and the band made it into Mick Mercer’s book, the Hex Files.  Here is the Candles and Intrigue CD https://www.discogs.com/Various-Candles-and-Intrigue/release/768603

JA: Oh wow! How long had you been playing/ creating music before the CD came out?

DB: We were in the right place at the right time for something big that was happening – namely the explosion of the second wave of goth. Before that song, I had been in a band before but it had been years before. The friends that pressured me into this all were aware of that .

Side Note: If you’d like to learn more about the origins of David Black and the band, make sure to check out his 1st band, Thrush in the pages of the Hardcore History Project.

JA: With your newest music video, what’s gone into creating it so far? 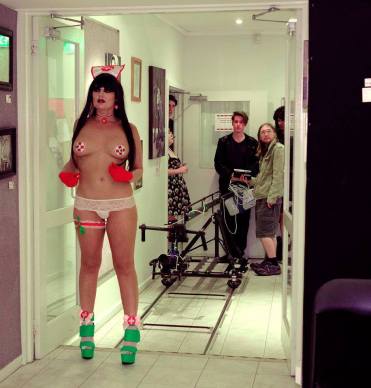 DB: Its the biggest to date. It had a cast and crew of around 50. Being the 9th music video and with such a long history, I ended up with a giant crew of many of the Melbourne Indie movie industries top people, and for the cast, the top of the acting, burlesque and carny scenes.

There were 4 camera crews going all day at the main shoot, and something like 4 truck loads of equipment brought in, a team of 5 or 6 make up artists, 3 photographers. 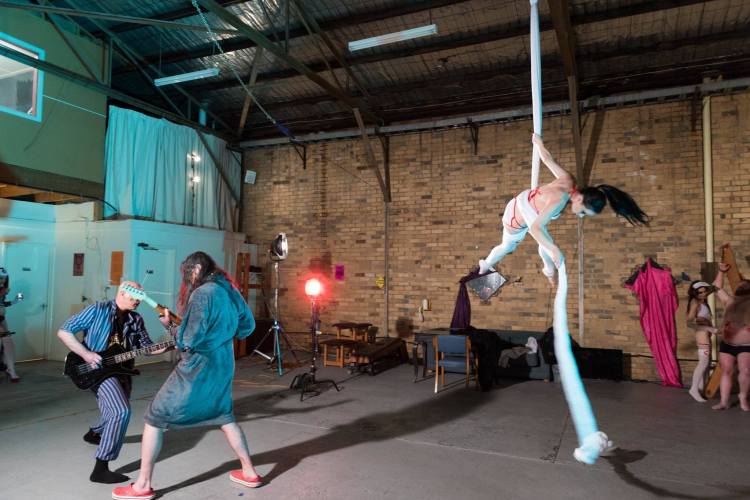 BD: It was months of pre production. Getting costumes and props ordered or made. Here are the paisties that were made for the ghoul nurses. Every little piece of costuming was weeks of discussions and planning. Same with make up and ordering things like glitter and studs and designing stuff.

JA: What’s been your favorite memory so far during the creation of the video?

DB:  Believe it or not, I was running around the whole day – most of the time covered in sweat, and I left the place delerious from the effort. I had cancer and had recovered, so this was my come back video – and the effort took it out of me.

JA: Holy cow. way to jump back in!

DB: There was one room where the documentary interviews were being done as well and I was running around so much that I almost didnt manage to do an interview.  Yep, for a guy that was just getting his energy back, in retrospect, I see that it was a bit ambitious – but it was impossible to imagine how busy it was going to be. I did sit down with them. While everyone was having lunch, I sat with the doco crew. Besides, the queue for lunch was massive anyway. We had a pro caterer there so everyone saw a fantastic array and just end up there.

JA: Gnarly effects make-up! How long did it take to put this video together?

DB: the video and song, once things really got underway, will have been around 1 years work. It was late April last year that I picked up with the work on both the song and video and started regularly working on it.

DB: I agree, but it is also worrying to do something big as a come back too. Its like there is a pressure to have this do well now.

JA: Props to you

DB: It is fast. And often I did feel like I was burning the candle at both ends. The promo side too is important and we have gone on something like 8 radio shows, the tv and now getting some coverage in your magazine.

JA: Yeah, been there myself. But the thrill of the creative process is infectious. David, thank you for sharing some of what you’ve gone through to create this newest video. I can’t wait to see how it all comes together!

For the New Music Video

Either keep an eye out here or follow David and Darkness Visible so you don’t miss out when this new creation tears into the world. Here’s where you can find them:

One More Song for the Road