Hello you lovely reader of the dark, today we have a guest post from author Dean Klein talking about gaining inspiration for writing his novels. And without futher ado- here’s Dean

Many authors are certainly inspired by the works of other authors, current or deceased. In that regard, I’m no different. Michael Crichton and Sir Author Conan Doyle are two of my favorites for their sophisticated works and the ability to share that sophistication through their excellent storytelling abilities. It is those qualities I attempt to emulate.

That is where my relationship with other authors ends. My books – not my writing – are inspired by movies. 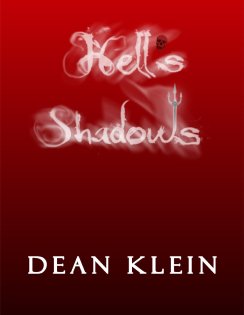 My first Stephen King-like tale is entitled Hell’s Shadows – a ghost/haunted house tale that is unlike anything ever done in the genre of horror.

I say “Stephen King-like” not because there is any element of his work in my story but because the first and foremost desire of an author such as Stephen is to – from the first page to the last – make the reader tense, to very tense, to perspiring. To put him on edge and keep him there. Indeed, people that review only horror have been struck by the story’s originality and unpredictability. And the film that inspired Hell’s Shadows? The original Poltergeist. In this author’s biased opinion, Hell’s Shadows is ten times scarier than that film. No kidding. A Poltergeist 2.0, so to speak and a big 2.0 at that. But guess what? Unless you are made aware of the cinematic inspiration for Hell’s Shadows, you would never in your life recognize my work as a sibling of that movie. The stories are a universe apart save for two deliberate nods to Spielberg’s film.

My second foray into the world of spooky books is a fascinating work entitled, King of the Nine Hells. And its cinematic inspiration? J.K. Rowling’s Harry Potter series. With two big differences. My book is in no way suited or recommended for children. It is so intense in places that professional book reviewers have stated it could cause some readers to have

nightmares. Second, this work is far, far advanced compared to the scenes and dialog presented in any Potter book. It is intended solely for mature YAs and adults (mature or not). And please appreciate this – this book has not a trace of gore in it. That’s right. All the tension is produced from enormously striking eerie assaults on the reader’s intellect. Several of the supernatural ‘effects’ are so imaginative and so frightening that they could well challenge a Hollywood special effects team.

So there you are. I’ve written other novels, too, in other genres that are also movie-induced. No need to go into them here. Left you with quite enough as it is, I believe!

For those of you that may be interested in exploring either/both of these works, you may find them on Kindle and Nook, as e-books or as soft-cover versions. (A personal note – for King of the Nine Hells, the e-book version is highly not recommended.) I thank everyone for your time and attention.

About the Dean Klein

The author is a former technical marketing director once responsible for the research and development of new business for operating companies as well as for corporate clients of Stanford Research Institute in Menlo Park, CA. Over the course of his career, he has helped his employers and clients of SRI collectively earn nearly a half-billion dollars in new product sales in the fields of specialty chemicals, advanced materials and thin-film coatings, among many others.

Spending his boyhood in Atlanta and later, Westfield, New Jersey, Mr. Klein holds bachelor’s and Master’s degrees in chemistry, biology and marketing (with a minor in English). His name appears on several patents though he largely spent his entire career in a marketing capacity in which he worked on almost a daily basis with research scientists.

Personal interests beyond writing include the study of vocabulary (now in excess of 60,000 words), video games, crossword and other kinds of puzzles, baseball, visiting the South Seas, Lotus and Jaguar cars, the game of bridge, daily exercise, collecting exotic plants and taking care of his best-of-house wire-hair fox terrier.

A note before you go

Dean sent me this guest post months ago and I lost it in the murk that was my inbox. Dean, I’m so sorry to have unintentionally left this post on the back burner for so long! And thank you again for sharing you thoughts with us here at Horror Made.