Whooo! Guest post today! And I’ll just hop on out of the way for Tom Deady to do his thing.

The Magic of Kolchak: The Night Stalker

Next month, the 2016 Bram Stoker Awards will be announced at the annual StokerCon convention. One well-deserved finalist for Superior Achievement in a Graphic Novel is Kolchak the Night Stalker: The Forgotten Lore of Edgar Allan Poe by James Chambers. For one generation, the nomination is a nod to a cool graphic novel. For me, and probably for a lot of horror junkies my age, it’s a pleasant reminder of why I’m a horror fan.

In January of 1972, The Night Stalker – a two-hour TV movie aired on ABC. It was watched by 75 million viewers – the largest audience ever (at that time) for a television film. The screenplay, written by Richard Matheson, was based on an unpublished novel from the late 60s. The main character, a sometimes hardnosed, sometimes bumbling reporter named Carl Kolchak, was played by Darren McGavin. Kolchak is covering a series of murders in Las Vegas where the victims are drained of blood and have what appear to be bite marks on their throats. He is convinced it is the work of a vampire, and ultimately tracks the killer and dispatches him with a stake through the heart.

Based on the overwhelming success, ABC followed up a year later with a sequel, The Night Strangler. Again, Kolchak is investigating a series of grisly murders, this time in Seattle, where victims are left with what appears to be decomposing flesh on their broken necks. Kolchak finds the killer in his underground lair beneath the streets of Seattle. Interesting note – there really is an “underground Seattle” buried below the modern city. The movie was a success and ABC saw the potential for a hit television series.

The series debuted in 1974 as The Night Stalker (it would be changed to Kolchak: The Night Stalker four episodes later), with Kolchak working at the INS office in Chicago. The show aired Friday evenings at 10:00PM and was met with mediocre ratings. The poor time slot, along with several disputes regarding the rights and the production, resulted in McGavin being disheartened. Many critics pointed to the “monster of the week” aspect of the show that resulted in its demise. After covering the traditional monsters: vampires, werewolves, zombies and demons, the show moved on to some bizarre and sometimes silly villains. The “Spanish Moss Murders” featured Richard Kiel (of James Bond “Jaws” fame) as a swamp monster. The show’s low budget did not accommodate the greatest of special effects and the monster was almost laughable. Later episodes included a headless motorcycle rider killing rival gang members and a suit of armor come to life.

In spite of the low-budget effects and the less than stellar ratings, the show attracted some of the seventies’ bigger names as guest stars: Scatman Crothers (The Shining), Dick Van Patten (Eight is Enough), Jan Murray (comedian), Larry Storch (F Troop), Phil Silvers (The Phil Silvers Show), Bernie Kopell (The Love Boat), Jackie Mason (comedian), Jim Backus (Gilligan’s Island), Tom Skerritt (Alien, Picket Fences), Erik Estrada (CHIPs), Jamie Farr (MASH), Larry Linville (MASH). The show was like a dark precursor to ABC’s The Love Boat. The star power did nothing to boost the show’s ratings and it was canceled after the first season.

Why, after a single season with mediocre ratings and no-frills special effects, is Kolchak still alive in the hearts of so many horror fans? James Chambers had this to say:

“Carl Kolchak, the Night Stalker is an American pop culture and horror icon whose persona resonates with a deep, intuitive element of human nature that knows the “official story” is often a cover-up for some monstrous truth—and yet he never stops seeking that truth, exposing those monsters, and doing whatever it takes to dispel them. Carl is a skeptic, a pragmatist, a charmer, occasionally a crusader, but above all he’s a humanist who still finds compassion and hope in a world that is darker and more cynical for him than it is for most people. I wrote Kolchak the Night Stalker: The Forgotten Lore of Edgar Allan Poe to explore that aspect of his character and to mine the rich common ground between Kolchak and the similarly morbid and wry yet not hopeless voice of Edgar Allan Poe. Horror fiction frequently shows us that the way to truth is walk through the darkness. Who better to have at your side on that kind of journey than Carl Kolchak?

For me, I think it’s more a case of nostalgia. Returning to my “roots” of horror. The show holds great memories for me. Without it, we might never have had the X-Files. Chris Carter has publicly stated many times that Kolchak: The Night Stalker was a direct influence on his series. Whatever it is that gives the character such staying power, I hope it continues. I’m rooting for Chambers to win the Stoker Award and introduce a new generation of fans to Kolchak. 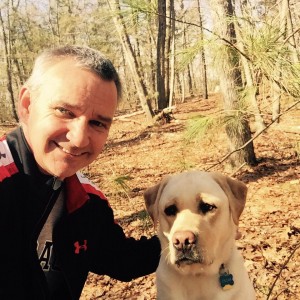 Tom Deady, born and raised in Malden, Massachusetts, is not far from the historic (and spooky) town of Salem. He has endured a career as an IT professional, but his dream has always been to be a writer.

Tom has a Masters Degree in English and Creative Writing from Southern New Hampshire University, and is a member of both the Horror Writers Association and the New England Horror Writers.

His new release, Eternal Darkness will be published by Bloodshot Books.

As always, he is actively working on his next novel.

Which- incidentally- you can now get your hands on!

Holliston, MA – January, 12, 2017 – Tom Deady, acclaimed author of Haven, is releasing another horror book, Eternal Darkness. For fans of old-school horror and character-driven stories with people you can identify with, this is sure to be a hit. Following the author’s debut novel Haven, Tom Deady’s Eternal Darkness novel promises a deeper look at the secrets people hide from one another, and the malice right next door.

Something is killing the people of Bristol, Massachusetts. Do you dare to find out what? First, a young boy goes missing. Then, his abusive father is slaughtered. Next, his grieving mother burns in an unnatural fire. The only thing you know for sure? Something’s not right. Ben Harris and his best friends Richie and Jack know the stories. Now, they must separate truth from lore when they dig for answers. Who will survive and who will succumb to the eternal darkness?

If there are three things to know about Tom Deady’s Eternal Darkness it’s:

Whether you are a fan of Haven looking for more, or new to Tom Deady’s work, Eternal Darkness from Bloodshot Books should be on your 2017 release radar. Pre-order your copy of Eternal Darkness on Amazon Kindle today: http://amzn.to/2ibyj9p