Hello my friends! I’m back from my journey to Italy and I have returned relaxed, inspired and hell-a ready for fall and (dare I say it?) Halloween! I have a lot of fun things planned for the next few months, but let’s start with why we’re all here today, inspiration, horror poetry, and the prize winner announcement.

The Patron Saint of Horror Haikuesday

The story behind this artwork:

While I was in Italy I was staying in a small rural city called Montescaglioso. (It’s in the ankle of the boot, down by Bari). Immortal Alexander and I timed our visit to match this HUGE festival the city throws for their Patron saint, San Rocco. they light up the town with arches of lights and marching bands travel through every street playing incredible music. (Seriously, as someone who grew up in a school where music was taken very seriously I can tell you, these people perform on the street what you’d think you’d only hear while sitting in front of the Phil Harmonic.)

Seeing this festival and learning the stories surrounding this Saint from my family and even from the artist who painted huge paintings telling the Saint’s story in the central church, I felt inspired. So, I brought a little piece back to you in the form of this artwork.

Many thanks again to Kylie Goetz who shared her poetry with us last month and to all of you for continuing to create amazing things in my absence. I could read a few poems each week, but I’m really looking forward to catching up on everything you’ve made now that I have a solid internet connection.

Here is a poem written by Kerry Liz on Kylie’s Word Of The Poetry blog:

Which makes this, our prize winning poem! Congratulations Kerry! I’ll be reaching out to you with details on how to we’ll sort out picking a print from my Society6 store very shortly. 🙂

Here’s a few of my favorite poems from the last few weeks:

A murder of crows
remind her of the friendship
so fatally flawed.#horrorhaikuesday https://t.co/fzHpLQALN0

If you love someone
You must kill him and see if
He comes back to you pic.twitter.com/bKDM9F5que

#HorrorHaikuesday
Write by candlelight,
My pet, For your truth will grip
The world by the throat. pic.twitter.com/EeQ2cECQz4

Now, let’s see what’s cooking today over on the #horrorhaikuesday on twitter.

Prints and other goodies can be found here: society6.com/horrormade/prints 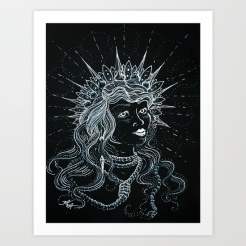