Where I am right now the heat is a relentless vengeful force, soaking into me before the sun even rises. Where today’s guest author is, winter has arrived and the bite in the air is nibbling at noses and toeses. Today is our last poem in the series by Benjamin Blake. So turn on your radios friends and listen to the messages seeping through the airwaves.

(Artwork was created by me, Jeanette Andromeda, in black ink on watercolor paper).

A futile attempt at a response
Little lights blink on and off on the dial
And out the small, round window
The stars seem to glimmer in time

Suddenly everything dies
The desk lamp, the radio, the quiet hum of the ceiling fan
On the wooded hillside
The brightest glow is growing
Pervading the surrounding pines
And trailing toward the skies

Last week we all went for a spin at the Vortex Club. Here are the tales that made it out:

Cocoon the next form
Wrapped in silk, butterfly
Filling up the skin#horrorhaikuesday pic.twitter.com/IKMqvnDHXw

#HorrorHaikuesday
Two spirits, both draped;
One in flesh and one in silk,
And both in regrets. pic.twitter.com/saNEJPWOYh

Graveyard dalliance
to tango with the corpses
before your dinner #HorrorHaikuesdaypic.twitter.com/MCCygFhN1b

Pack for the picnic.
All the dainty comestibles
wrapped for convenience.#HorrorHaikuesday pic.twitter.com/W5llwolPAq

Benjamin Blake was born in the July of 1985, and grew up in the small town of Eltham, New Zealand. He is the author of the novel, The Devil’s Children, and the poetry and prose collections Southpaw Nights, and Standing on the Threshold of Madness, as well as the forthcoming split All the Feral Dogs of Los Angeles. Find more of his writing (and photography) at www.benjaminblake.com. 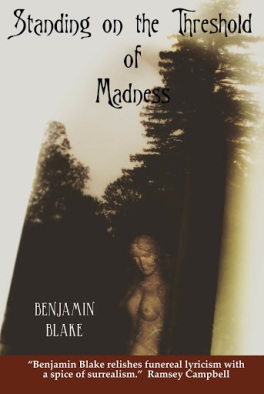 Praise for Standing on the Threshold of Madness and Benjamin Blake

“I was most impressed with Standing on the Threshold of Madness. These dark, brooding vignettes do far more than send a shudder up one’s spine (although they do that again and again, with elegance and panache). Benjamin Blake has found a way to infuse into his horrific lyrics a keen sensitivity to human emotions, an understanding of the fragility of life, and a bleak portrayal of the evanescence of all existence. This is a volume that aficionados of weird poetry will want to read over and over.”–S. T. Joshi

“Language and imagery rule in this collection of dark visions. Blake has a distinctive voice, rich in surrealism, and he uses it to considerable effect.” – Bruce Boston, SFPA Grandmaster Poet

“A plethora of dark and haunting poems that could be likened to a bone chilling symphony overall!  Mood enhancing language that will curdle the blood, and excellent, original imagery!” – Marge Simon, Bram Stoker Award winning poet